Frontispieces don’t typically blow the reader’s mind. But Salman Rushdie’s new book opens with (for this reader, at least) a truly mind-blowing frontispiece. It’s Goya’s etching Los Caprichos, no 43, with its famous quotation, “El sueño de la razon produce monstruos.” (“The sleep of reason brings forth monsters.”) Like most people, I have always taken this at face value as a defense of reason against superstition. Being generally in favor of reason and scientific thinking, and suspicious of claims about the world that can’t be tested (crystal healing, etc.), I was more or less “primed” for this interpretation.

“Fantasy abandoned by reason produces impossible monsters: United with her, she is the mother of the arts and the origin of their marvels.”

This idea launches and permeates Two Years, Eight Months, and Twenty Eight Nights (that’s 1,001 nights for the mathematically disinclined), Rushdie’s dizzying, delightful new novel in which a rift opens between Peristan (the fairy world) and our own. On another level, it’s about the interplay of fiction and reality, or the ways that stories (true, made-up, and somewhere in-between) rule our lives.

Humans are storytelling animals. Our ability to “make sense” of the world and our place in it through narrative is one of our most distinctive features as a species. As Oliver Sacks brilliantly chronicled in his case studies of brain-damaged or neurologically atypical patients, we seek coherence at all costs, filling in the gaps with fiction when necessary. And as psychologist Daniel Kahneman and his partner Amos Tversky demonstrated in a series of now classic experiments, our cognition is riddled with biases — false beliefs and misunderstandings — that make purely rational thinking impossible for us.

A lesser mind than Rushdie’s (or Goya’s, apparently), confronted with these incongruities, would simply admit defeat. See? Rational thinking is impossible! Therefore science, with its focus on evidence and reproducibility is just another story with no stronger claims than any other narrative on objective “truth.” 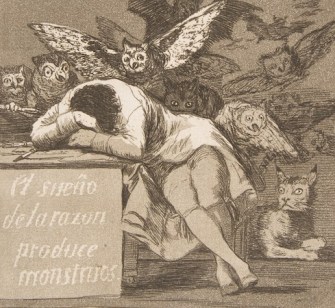 What Rushdie gives us in Two Years… is something far subtler. On its surface, it’s a cartoonish explosion of historical and pop culture references held together by an apocalyptic fairytale about Dunia, a Jinnia (female genie) who falls in love with a human (the historical philosopher Ibn Rushd –– Salman’s namesake) and gives birth to a tribe of semi-human, semi-Jinns she calls the Dunyazát who, among other distinctive features, have no earlobes. There are references to Bravo TV (although the network no longer exists in the world of the novel; people call idiots who like to showboat on reality TV “bravoes.”) and to Kim Jong Un (one sign of the apocalypse at the center of the novel is a baby-faced dictator who forces everyone to get the same bad haircut as him).

The story is fun and compelling enough on its own (although it does take a little while to get going. I was hooked from around page 70), but the novel’s real pleasures live in the way Rushdie toys with that idea in the frontispiece, beginning with reason and fantasy literally having sex and producing marvels. In Peristan, the Jinni and Ifrits (these words are used more or less interchangeably) apparently have amazing sex constantly, but as a species (?) they’re a total mess: raw, screaming power and potential without context. For this reason, Rushdie tells us, they’re fascinated by humans and enjoy interfering with our lives through possession and other forms of havoc-wreaking, just to be part of a story, any story, for a while. This is a pretty one-sided relationship, obviously, and not especially sustainable for anyone involved.

Humans, on their own, aren’t doing a whole lot better. Most of the book’s purely human characters are flawed in some fundamental way. There is a brilliant heiress (nicknamed “The Lady Philosopher”) whose studies have turned her into a nihilistic recluse, confined to her mansion, bemoaning the pointlessness of everything. Reason without imagination. There are religious charlatans and unscrupulous real estate speculators. And Ibn Rushd’s great enemy, the philosopher Ghazali, whose sole purpose in life (and death) is to destroy Ibn Rushd’s rationalism and make humanity cower before an inscrutable God.

More than anything else, hypocrisy seems to characterize our species in this book, and in that respect, the chaotic Jinni have one up on us: At least they’re true to themselves.

The novel really comes into its own in the “Time of the Strangenesses,” when the aforementioned rift opens (in Jackson Heights, Queens. Why not?) and evil Jinni and Jinnia begin pouring through to terrorize us in overt and covert ways. Some of Rushdie’s most brilliant bits of wicked satire have to do with human reactions to the Strangenesses, a series of inexplicable events such as the mysterious appearance NYC’s city hall of a baby with the power to expose the corrupt by infecting them with an ebola-like degenerative disease. A group of intellectuals calling itself the “post-atheists” claims that these horrors are the deserved consequence of our own irrationality. We are being punished for inventing gods and other fairytales. In other words, for too much storytelling.

Fiction (especially from a writer as well-versed in both fiction and fact as Rushdie is) tends to have a much more powerful effect on me than even the best-written non-fiction. So I read much more of it, feeling guilty all the while for not being a more serious, grown-up human being. In Two Years… Rushdie gives a convincing and thoroughly enjoyable defense of the mutual necessity of thinking clearly and dreaming up the impossible. More sober tongues might spit it out, but to me, it’s nectar.

—
@jgots is me on Twitter
You might also like our podcast, Think Again, where we surprise smart people with unexpected ideas. George Takei, Henry Rollins, Bill Nye, and more have been on. We’re taping with Salman Rushdie this weekend.
Tags
overthinkingeverything
In this article
overthinkingeverything
Related

It’s Time to Talk: Islam and the Future of Tolerance

We need to talk openly about the world we live in because evil thrives on silence and secrecy. I’d go so far as to say that it can’t exist without them.

People in the City Are Too Damn Close Together

Urbanization is increasing rapidly, worldwide. It’s good for innovation, but is it good for people?

This isn’t the Matrix. Should you wish to face the ugly reality, there’s no red pill you can swallow.
Personal Growth

Sleep, Work, War, and Other Things We Can’t Agree On

There is no sense whatsoever that we are on the same page here, working toward some roughly agreed upon vision of a better future.
Personal Growth

The Tao of Selma (or, the Problem with Productivity)

The trouble with productivity as a value is that it treats a morally ambiguous act as a moral good. What, specifically, do we want to be producing more of?
Up Next
Starts With A Bang

Throwback Thursday: The Little Bit Of Dark Matter We Know

Dark matter makes up the vast majority of mass in the Universe, and most of it is unknown. But not all of it.“A cosmic mystery of immense proportions, once seemingly […]