In a world in which many aspects of life and what we believe seem to be trending in the wrong direction, a 32-year study in Australia offers hope.

In 1986, researchers began polling first-year biology students at Sydney’s UNSW, offering four options about their beliefs on evolution and creationism: 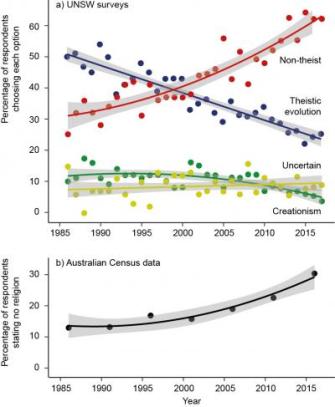 An average of 530 students takes part in the survey each year. Michael Archer, a professor at UNSW’s School of Biological, Earth & Environment Sciences, as well as lead author of the study, wanted to know if introducing evolution to Australian students would be as challenging as it is with American students, given this country’s fundamentalist views on creationism.

Archer says the view that God created people whole cloth has always been relatively small: 10.4 percent at the beginning of the study, down to 5 percent now. The more surprising trend has been the drop in the theistic view that a divine entity played at least some role in the process. He says,

While Australia appears to be growing more secular, some factions in American society are moving in the opposite direction. In 2017, eight states proposed laws that would allow some level of creationism to be taught in public schools. Recently, attorney general Jeff Sessions announced the creation of a “Religious Liberty Task Force,” which many believe will have the opposite effect on actual religious liberty—specifically, freedom from religious ideology, which is often not taken into consideration by the faithful.

While Americans have the right to believe whatever they’d like, this fundamentalist push has real-world consequences, namely on one the biggest threat to the world today: climate change. Skepticism about mankind’s role has been pushed into American classrooms by fundamentalists that want to engage in the “debate” over whether or not it is manmade.

While Australians can escape dogmatic religious ideas removed from reality, they cannot escape the devastating effects that global warming has had on their nation’s agriculture. While it’s reassuring that the country’s biology students are learning, Americans would do well by following suit.

A recently solved murder case from the Netherlands illuminates some of the promises and ethical questions raised by the police practice of using genealogy databases to identify criminal suspects.