Religious typology has never been accurate. The range by which one can claim to be Christian, for example, is much broader than one simple term can encompass. The same holds true for Judaism, Islam, Buddhism — not the umbrella term, per se, but the level of devotion. Religious Buddhists can be as fundamentalist as Evangelicals; they can also be secular and even atheistic.

Instead of defining Americans in terms of stated religion, the Pew Research Center created a 16-question survey about the participant’s level of practice and belief. The questions were pulled from years of similar research, factoring for redundancies. This process has resulted in a new typology of seven religious styles that will serve as the organization’s classification system for better understanding how we practice faith in this country.

The survey was conducted during a two-week period in December 2017 and included 4,729 respondents. As Rich Morin, a senior editor at the center, comments on this classification system,

Our goal was not to replace traditional religious categories but instead to create categories built around personal religious and spiritual beliefs, as well as behaviors and experiences that are broadly shared by people of different faiths.

Morin believes this is even more telling than the label we choose for our belief system because it offers researchers an opportunity to better understand what unites people across various faiths, as well as what divides members of the same religion. He found it particularly interesting that even those on the far end of the religious spectrum, New Age beliefs still influenced their outlook. More expectable realities — the right is more religious, liberals less so — are expressed in the report. 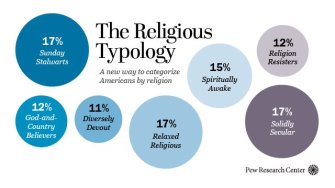 Sunday Stalwarts. These believers are actively involved in their communities and their faith. Sunday morning is only for one thing for 80 percent of this group. Their level of belief in their doctrines and texts are unquestioned, even though 30 percent believe in psychics and the energetic importance of crystals and trees. Their identity is intimately tied to their faith. This is the oldest of any group, with 32 percent over age 65. Stalwarts are predominately Protestant, but also include Hindus, Muslims, Jews, and many others.

God-and-Country Believers. This group’s level of faith rivals the stalwarts, but they are much more politically focused. These are the nationalists and populists that are likely to believe America has a manifest destiny. They are also more intolerant of immigrants and those of other faiths. Evangelical Protestants are the largest contingent of this group, though Catholics, Mormons, and even religiously unaffiliated are included. Fifty percent of this group lives in the South, the highest of any group.

Diversely Devout. For those immigrants and ethnic minorities that are as faithful as the above groups, this category fills the void. A majority of this group — the majority of whom are textural literalists — also believe in crystals and reincarnation. While this might sound odd from an American perspective, New Age beliefs and traditional religious ideology are intertwined in many Latin American and African communities. Being a good person, as in the two previous groups, requires a belief in God. Interestingly, a percentage of this population includes those who claim their religion is “nothing in particular.” This is the only group that is not majority white. 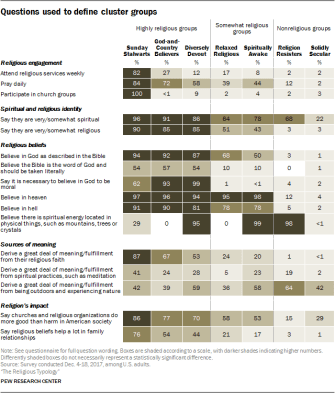 Solidly Secular. This group is comprised predominantly of white men that are relatively affluent and highly educated — 45 percent hold a college degree, the highest of any group; 46 percent earn over $75,000 a year, also tops in this survey. This is where atheists and agnostics conspire, relying more on science and provable facts over speculation and blind faith. Twenty percent of this group describes themselves as agnostic, while it boasts the largest collection of atheists of any group.

Religion Resisters. The previous group might not have much faith, but they’re not necessarily rebelling against ideologies. That’s the domain of this cohort, which resists traditional religious assumptions, choosing instead to place emphasis on energies and spiritual awakenings. These people are, to use a common phrase, “spiritual, not religious.” This group, as with the previous, is more likely to be liberal and vote Democratic. This group has the youngest median age, at 38. They also disapprove of Donald Trump’s performance more than any group; 84 percent believe he’s not helping. 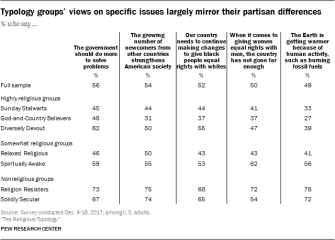 Relaxed Religious. This interesting collection features 70 percent who believe in the biblical God and about 40 percent who pray daily, yet they rarely attend services and do not feel a higher power is necessary to be a good person. Faith is more ambiguous and less proactive. The two top sources of meaning for those in this group are spending time with family and spending time with friends, with caring for pets coming in a close third.

Spiritually Awake. Every member of this group holds some New Age belief, even if some think the Bible is the way to go. Some form of higher power is involved in the daily orchestration of events. This group features the highest percentage of women of any group, at 62 percent.

Miners in Australia discover gold rocks worth over $10 million

A mining company in Australia has unearthed what could be some of the largest gold specimens ever discovered.