For 12 centuries the Olympics was a centerpiece of Greek life. The Games, held in Olympia from the 8th century BCE to the 4th century CE, were both religious (they coincided with ritual sacrifices) and political (religious pilgrims were allowed to pass through warring territories unharmed). There was always controversy, especially as Roman culture moved in. Yet the legacy persists today.

After a 14-century hiatus, the Olympics was officially revived in 1896. (The name “Olympics” was used by various regional events in the interim.) Two hundred and forty-one athletes representing fourteen nations traveled to Athens to partake in 43 events that year. Today, the Olympics boasts over 200 nations every two years.

The overarching theme is peace between nations, though the Games have never been without controversy. The committee has lifetime appointment; politics is unavoidable. Bribes for host cities—a giant economic incentive for winners—have been offered and accepted. Calling the commercialization of the contest excessive is an understatement.

And yet, we love the head-to-head competition. We love watching gymnasts take flight. The underdog inspires us. The possibilities are endless, which is why persistent doping scandals disappoint. The ideal is quite democratic: work your ass off and succeed. Rise above the pack; transcend the sport. That’s what we think of, at least, when conjuring Olympic athletes in our mind.

The Role of Genes

In his book, The Gene, Siddhartha Mukherjee writes,

Once we start thinking of genes as destiny, manifest, then it is inevitable to begin imagining the human genome as manifest destiny.

This “new epidemiology of self” is used to describe everything about us. Our identity, illnesses, temperament, and abilities boil down to the genetic codes wrapped inside of our body—that make our body. Sure, environment and opportunities matter, but a solid genetic building block offers a potentially prosperous head start, one that might prove dominant if the conditions are right.

As much as we’d love to imagine the Olympics as a peaceful exchange of healthy competition, the reality is nations want to win. Governments have vested financial and political incentives for accruing gold medals. And in a world based on reality shows, everyone wants to be in the spotlight. This is not to claim that many athletes aren’t involved to be the best in the sport. But the nations supporting them have other ideas in mind.

Enter China, where the government has announced that it is establishing a laboratory standard for selecting Olympic athletes by genetic markers. In order to compete in the 2022 Games, potential athletes will have their genome sequenced.

Complete genome sequencing will be applied on outstanding athletes competing in the winter games for speed, endurance and explosive force, with at least 300 athletes in each group.

Three governmental agencies—the General Administration of Sport of China, the Ministry of Education, and the Chinese Academy of Sciences—are conducting genetic profiles through 2020 in preparation for the 2022 Games. They are not alone, as Australia, the United States, and Europe have all conducted similar tests. Yet none of these countries report using the information to select athletes.

Every person is born with the right to participate in sports. Each individual has their advantages and disadvantages. The spirit of sport is to overcome weakness and fight for the best . . . People should not be judged by the way they were born, but what they strive to become. 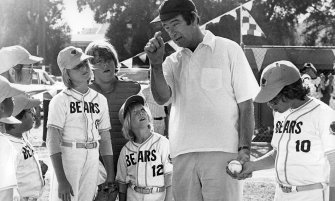 Walter Matthau instructing his team in a scene from the film “The Bad News Bears,” 1976. (Photo by Paramount/Getty Images)

Bad News for the Underdog

China is not a democracy. A recent report in the New York Times regarding Muslim detention camps being used to “transform” citizens into Communists has caused the US government to consider sanctions. And while genetic cloning has been a hot moral topic in scientific circles, Chinese scientists have had no reservations in experimenting. Genomic testing to filter out Olympians is certainly no stretch.

Yet in this science fiction script that we’re living through, the future has arrived. Perhaps I’m being romantic. One of my favorite cinematic franchises growing up was The Bad News Bears. The story of an inept collection of hooligans figuring out how to work together to win a championship was too alluring to deny. While in our hearts we all imagine ourselves to be Goliaths, it’s the Davids that appeal to our imaginations most.

So when a nation decides it’s only going to foster the capabilities of Goliaths, something fundamental in our experience gets lost in translation. Is it immoral? Hard to tell. Genetic testing is one of the most important scientific advances in modern times. We’ll soon be able to screen for incurable diseases and potentially thwart their development through technologies such as CRISPR. We’ll identify diseases of aging and implement best practices to stave off their assumed certainty. We’ll know a bit more about who we are and become healthier animals because of it.

But the Olympics? One of our greatest tragedies is believing the beauty of existence is in the victory and not the game. The journey, not the destination—something Zen like that. Life becomes less meaningful when the element of surprise is removed from the equation. You get Serena’s outburst instead of Naomi’s stellar performance. You get the lesser of what we are because we were so focused on what we think we should become.

Istanbul’s “Smart Mobile Waste Transfer Centers” scan and assign a value to recyclables before crushing, shredding, and sorting the material. Will they help to prevent littering?