A 2006 study of attitudes in 34 nations concluded the U.S. ranks second to last in the number of residents who believe in evolution. Another study from 2017 finds that while 38% of Americans consider themselves creationists—a new low—only slightly more than half, 57%, believe we evolved from animals. It’s difficult to assess the impact of the “intelligent design”/creationism curricula instituted by Republican school boards lately, motivated by religious beliefs, but a new study from University of Pennsylvania published in BioScience finds that neither religion or party affiliation are sole determinants of whether someone accepts evolution as fact or not; there’s also the degree to which the person understands the science behind it. The authors explain: “The current study was designed to gain a more accurate view of how Americans think about evolutionary theory, with the particular goal of investigating whether individuals’ knowledge about the theory plays a significant role in their acceptance of it.”

“We find the traditional relationship between your religious beliefs and evolution, and between your political beliefs and evolution,” Deena Weisberg one of the study’s authors, tells Penn Today. “But we also find that those are not the only factors that matter. They do matter, but if you know more about evolutionary theory, if you understand it better, you’re more likely to accept it.

The study surveyed 1,100 Americans selected to be demographically representative of the U.S. population, with weighting applied as necessary to ensure the proper proportions. The survey was conducted online by YouGov.

A great deal of thought and research went into the construction of the questions asked of the subjects so as avoid triggering biases that would stand in the way of accurate answers.

As one example, the researchers used a question structure recommended by the National Science Foundation as a way to help ensure that people answered based on their understanding of the science rather than their personal feelings. With each question beginning “according to scientists” or “scientists would think,” even those who reject evolution may feel invited to display their understanding of it.

Another interesting consideration was that previous studies have found that wording can trigger unconscious biases and skew responses. The current study cites one such example. When subjects were asked their reaction to the statement “evolution is the best explanation for the origins of human life on Earth,” 38% disagreed. When the question was changed to “evolution is the best explanation for the origins of elephants on Earth,” only 25% disagreed. The suspicion is that evolution for animals holds the inquiry at arm’s length from the controversy regarding human evolution. Likewise, the authors found that asking about “plant and animals” as opposed to “humans” resulted in less emotionally charged responses.

Belief in evolution isn’t binary. There are four possible stances depending on one’s view of God’s involvement, and the researchers sought to make sure they were all available to respondents in multiple choice questions. The stances are: 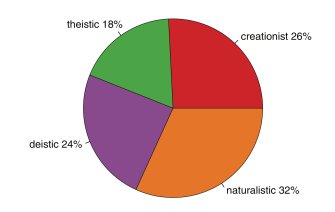 The respondents’ beliefs as reflected in the online poll. (Credit: Weisberg, et al)

“In measuring knowledge of evolution, we tried to offer scenarios,” says Weinberg. For example:

“There is a population of fish that can eat minnow. The minnows move really fast and are hard to catch. In the next generation, what kind of fish who eat these minnows are more likely to survive?”

“In designing these questionnaires, we think about what sort of assumptions people are going to make, what they’re going to be thinking that we may not want them to think about. A lot of the work has been in trying to refine our question-asking methods to get around some of these issues.”

The subjects’ understanding of evolutionary science was reduced to a simple pass/fail system: If someone got less than 60% of the answers right, they failed. 68% of the respondents failed the science test.

The authors find, “Even when taking into account the participants’ level of religiosity and political conservatism, as well as their age, gender, and level of education, performance on our knowledge battery was still a significant predictor of their level of acceptance. Crucially, and contrary to some similar work on climate change, we found a relationship between increasing knowledge and increasing acceptance at all levels of religiosity and political ideology.”

Plotting belief against a person’s knowledge level breaks down this way: 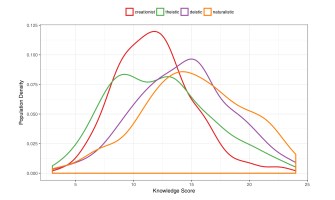 So, for example, the number of creationists tapers off as knowledge increases (Credit: Weisberg, et al)

“The crux of this research,” says Weisberg, “is that even once you factor in religious and political ideology, some of the variance is explained by knowledge level.” Not all, though.

It may be that the degree of religiosity affects ones’ knowledge level—this is sort of the same observation as above, but from the other direction. 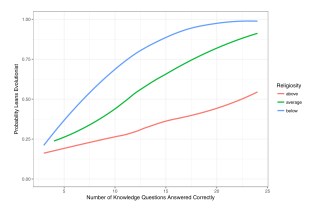 One’s political view also relates to the level of one’s scientific knowledge, like so: 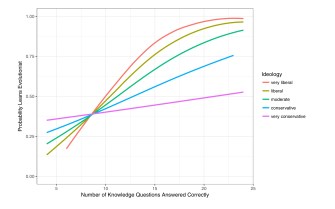 “We are by no means done with this investigation,” says Weisberg. The research team has just finished analyzing a second set of data, and is also investigating the best ways to increase Americans’ scientific understanding of evolution. “We’re going to get some more nuanced results.”

Study: Sharks like jazz over other genres of music