A survey by CreditCards.com has data to show that millennials are the worst tippers; a full 10% of people age 18 to 37 will leave no tip at all when dining in a restaurant.

Interestingly, however, 25% of that generation would rather just pay a higher bill for service or food than worry about tipping. Among other demographic groups, 26% of people who make over $75,000 would also just rather pay a higher bill from the get-go, as do 30% of people with college degrees. More about that in the video below. 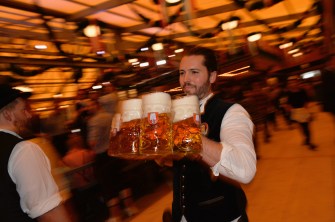 Germany has a law that servers must be paid a living wage. (Credit: GUENTER SCHIFFMANN/AFP/Getty Images)

“Tipping at sit-down restaurants has always been the standard in the U.S., but that’s not necessarily the case in other countries. We’re seeing younger adults tipping less, and even showing a greater preference toward eliminating tipping altogether, even if it means paying more on the bill,”  says CreditCards.com senior industry analyst Matt Schulz.

The other groups revealed as low- or no-tip folks are Southerners and parents. Married couples without children were better tippers than those with offspring.

Given that the tipped minimum wage has remained at $2.13/hr for 27 years in states that haven’t modified the law themselves, it can mean servers who expect to pull in a decent paycheck for the night come up short. 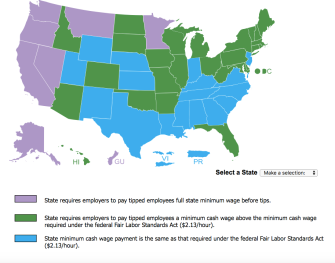 Find the interactive image at this link. (Credit: Department of Labor)

Other countries take the fretting out of it. Germany, among many, has laws on the books that servers must be paid a living wage, so folks are only expected to round up the bill; your take is $36? Just make it $40. It seems like a much more reasonable way to be in business than expecting customers to supplement wages, eh?

How eye disorders may have influenced the work of famous painters

Are some of the most particular painting styles in history the result of impoverished vision, or a conscious artistic choice made by the artist?