If you were to go by the stream of psychology and neuroscience books published over the last two decades, you’d think Buddhism is an intricate philosophical system designed by a man with a keen insight for the emergence of psychoanalysis and philosophy some 2,400 years down the road.

Indeed, Buddhism lends itself to emergent sciences in ways no other faith has. In fact, many modern thinkers, including Sam Harris and Stephen Batchelor, question if faith is even necessary to understand Buddhism. The question of faith is one Siddhartha Gotama generally avoided. As Batchelor writes:

Gotama’s dharma opened the door to an emergent civilization rather than the establishment of a “religion.”

In an early instance of transcending tribalism, Buddha opened up his teachings to the entire world; it was not a gender- or race-dependent practice. Monks and nuns were in a co-dependent relationship with the public: the clergy offered spiritual sustenance while commoners provided them with food and money. Anyone could partake in the Three Jewels, either for a lifetime or, in some nations (such as Japan), for a season: dharma, Buddha’s teachings; sangha, the community; and the Buddha. Faith in these three aspects offers ground-floor entry into the Buddhist life.

Yet, if faith is required, how is it not a religion? There is a notable difference in the way that Buddha treated religion and the ways in which his followers translated his teachings. Buddha was skeptical of the Indian faiths surrounding him. Buddhism arose thanks to Siddhartha’s incessant questioning of traditions and spiritual authorities. He abandoned his two yoga teachers upon realizing they wanted him to believe what they taught without experiencing it for himself. In Buddhism, faith is dependent on experience and reasoning, not unexperienced hopes or wishful thinking.

Yet in practice, Buddhism is very much a religion. As of 2010, there were 488 million Buddhists, representing seven percent of the planet’s population. The bulk resides in Asia, some 481 million, with North America coming in second at just under four million. Half of all Buddhists live in China, with Thailand, Japan, and Myanmar rounding out the top four countries. 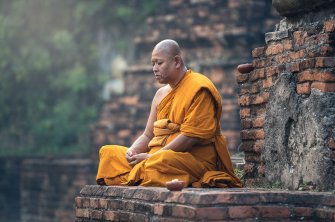 Within the teachings, there is plenty of examples of metaphysical ideology, which links Buddhism to other religions. One of the most relevant genres of Buddhist literature is Abhidharmakosa, or “metaphysics.” The lessons inside of these texts were said to be spoken by Buddha directly to the gods—his deceased mother being the main listener.

Despite a growing pile of clinical literature regarding the efficacy of mindfulness meditation, Buddhist rituals and beliefs do not always jive with modern science. In the Agganna Sutta, a Buddhist origin myth, the gods live on Mount Meru’s slopes and atop the summit; one part of the mountain is made of lapis lazuli, which is why the ocean is blue. For these deities, one year is equivalent to one hundred human years; they get a thousand god years until death.

There’s also the most contentious philosophy in Buddhism, rebirth. Of the 14 questions Buddha refused to answer, whether the universe has a beginning or end comprise two. During the cycles of existence (samsara), “you” can be born (and reborn) a god, demigod, human, animal, ghost, or denizen of hell. Displaying charity during your life makes it likely you’ll be reborn a god, some of which have no physical form but exist only at the level of consciousness—a direct contradiction to our current understanding of embodied consciousness.

There are plenty of taboos and praying going on in Buddhism as well. There’s even a scam ring based in New York City’s Chinatown (that has spread outward) in which “ghost marriages” drain money from susceptible parents and grandparents. Buddhist ghosts live 500 leagues beneath the surface of the planet, emerging randomly to toy with human affairs. Only monks with supernormal powers can spot them.

Despite the Buddha’s refusal to acknowledge a beginning or end to the universe, Buddhist cosmology is intricate and intense. Eight hot and eight cold hells await those who don’t follow their vows, and those aren’t even the only hells. Sentences are everything but lenient: getting thrown into a hot hell costs you millions of years. You’ll receive such a sentence if you kill your mother, father, or an arhat (an enlightened being that will achieve nirvana upon death). You’ll also reach this blazing cauldron if you wound the Buddha or cause a ruckus amongst monks and nuns.

Since the Buddha taught for 45 years after his awakening, there is no “book” that represents the totality of his teachings. Buddhism is even called a “religion of the books.” Just as the Bible was written by numerous people over the course of centuries, Buddhist texts better represent the mindset of each particular author than any comprehensive overview of what Buddhism entails.

Is Buddhism a religion? To many, certainly. Like other world religions, it offers a set of ethical codes to be followed, best practices used to instill empathy, calm, and compassion into your day. It also has its system of metaphysics. What follows life—the heavens and hells—is specific to Buddhism, yet every religious system has devised its own mystical taxonomy. In this sense, Buddhism is not alone. 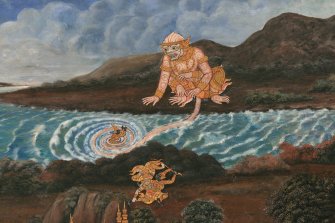 Yet Buddhism is also uniquely positioned to impact the growing secularism manifesting across the planet. And for this, there is plenty to learn from Buddhist ideology. As the writer Pankaj Mishra notes regarding one of Buddhism’s main exports:

As with any kind of mental training, the discipline of meditation steadily equips the individual with a new sensibility. It shows him how the craving for things that are transient, essence-less and flawed leads to suffering.

Instead of craving an afterlife, Buddhism’s intensive focus on the present moment, as well as developing an awareness that your actions (karma) produce consequences, prepares the initiate to face any trouble life presents them with. In this way Buddhism is not tribal, even if it’s been turned into in- and out-groups waging wars. The sangha is more a collection of individuals sharing the perspective that desire is the root of suffering and your accumulated actions affect the world we all inhabit. Personal responsibility and social decorum interact.

These are lessons as applicable to our world today as during the days when Siddhartha spent over half of his life teaching them. For the religious, there is plenty to contemplate in this tradition. Regardless of spiritual affiliation, the knowledge that we suffer and that techniques exist for overcoming this suffering is of immense value, no metaphysical beliefs required. The faith is in the proof.

Seven reasons people no longer want to be teachers

The programs are long and intense, the creativity and relationships aspect of the vocation has been eroded, there is pervasive negativity in the media, and comparatively poor salary and working conditions.