Recognizing the potential consequences of cultural shifts are difficult when you’re personally invested in an outcome. Assuming a level-headed view about the pitfalls of any movement helps to protect the integrity of the cause and those involved in it.

Take cannabis. There are many reasons to be excited about the upswell of marijuana legalization efforts in America: a reduction in criminal prosecutions; the release of prisoners serving marijuana-related offenses, which disproportionately affects the black population; to combat the opioid epidemic; increased funding for clinical research; and the general loosening of a half-century old bias toward a substance that often does more good than harm in users.

Of course, there are detrimental effects. One recent research project focused on how legalization impacts teenagers. The new study, published in the journal Prevention Science discovered that over a 10-year period, youth aged 12-21 dramatically increased first-time consumption of marijuana at a higher rate than the more usual suspects, alcohol and tobacco.

Studying data from 2004-2014, the team, led by Brian J Fairman, an epidemiologist in Post-Doctoral Training at the Eunice Kennedy Shriver National Institute of Child Health and Human Development, analyzed the behavioral habits of over 275,500 individuals in this age group. In 2014, 8 percent of individuals reported marijuana being the first substance they’ve experimented with; that number was 4.8 percent a decade prior. This trend was exactly the opposite with cigarettes: 9 percent in 2014, down from 21 percent in 2004. 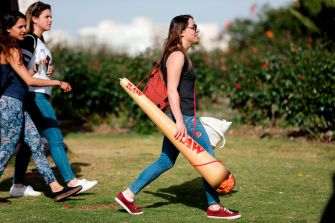 A girl carries a mock marijuana joint on April 20, 2017, during a rally at the Rose garden in Jerusalem, to celebrate 420 and to express their defiance of current laws. (Photo: THOMAS COEX/AFP/Getty Images)

The team notes that the nation’s relaxing of both legislative action and social stigmas against marijuana, combined with increased ease of access, accounts for part of this shift. Add to the fact that a half-century of warnings about the danger of cigarettes as well as numerous efforts to curb drinking appears to have influenced their decision-making process.

Interestingly, this trend toward first-time marijuana usage affects certain populations more than others. For example, cannabis users tend to be older and male. They are also more often black, American Indian/Alaskan Native, multiracial, or Hispanic than white or Asian. The team speculates the reasons likely include availability in those communities as well as perception and usage in older generations.

While the long-term effects of this trend are unknown, the study notes that using marijuana during adolescence puts users at an increased risk of heavy toking in adulthood, as well as being susceptible to cannabis use disorder (CUD). Potential cognitive problems during adolescence are also an issue, though the seriousness of this is debated. As was reported last year in Scientific American:

During adolescence the brain matures in several ways believed to make it more efficient and to strengthen executive functions such as emotional self-control. Various lines of research suggest that cannabis use could disrupt such processes.

Our endogenous endocannabinoid system undergoes dramatic changes during our teenage years, playing a critical role in how our brain is wired for a variety of functions, including appetite and hormonal changes, sleeping habits, emotional arousal and regulation, memory function, and movement patterns. Habitual marijuana users experience altered connectivity between their brain’s hemispheres, resulting in “inefficient cognitive processing in adolescent users, and a smaller amygdala and hippocampus—structures involved in emotional regulation and memory, respectively.”

While research is more forgiving for adult users, thus far sample sizes in adolescent research have been relatively small. Understanding the actual risks of early usage will require more funding and better long-term studies, both of which appear on the horizon thanks to the loosening of state (and potentially federal) restrictions.

Still, Fairman and colleagues suggest stronger public interventions might be called for. He notes that the communities most affected by this trend are also those least likely to have access to treatment facilities. This is a worrisome trend worth exploring. As he says of this study:

To the degree these trends continue and greater numbers of youth start with marijuana as their first drug, there may be an increasing need for public interventions and treatment services for marijuana-related problems.

Using marijuana first also does not mean individuals won’t also smoke cigarettes. The data show the opposite: there is no statistical difference between those who began with marijuana or tobacco in determining which individuals become nicotine-dependent. According to this study, 90 percent of lifetime marijuana users report smoking cigarettes at some point in their lives.

Youth who start with marijuana may also have an easier and quicker time transitioning to smoking tobacco compared to other substances. Both drugs share a similar, and thus familiar, route of administration and the two drugs can be easily mixed together within a single preparation (e.g., blunts, spliffs).

Perhaps the cultural intervention should include, as this study suggests, honest educational efforts. We generally take a hands-off approach to counseling youth, beyond ambiguous and misleading sentiments like “drugs are bad!” This is akin to our views on sex education, employing avoidance and platitudes rather than confronting evidence. Other nations have a much better approach. In fact, we should mine sex education in the Netherlands for ideas.

Beginning at four years old, children begin learning about not birds and bees, but penises and vaginas. Sex education is mandatory in primary school. The role of sex and relationships is not taboo; it is openly discussed during class. Gender differences are not hidden; they’re open for dialogue. Sexual abuse is considered at an early age while the young are educated on contraceptives. This has resulted not in an increase of teen pregnancy and STDs but one of the lowest rates in the world.

A mandated educational program in public schools that honestly investigates a variety of substances—marijuana, alcohol, cigarettes, opioids, sugar—would remove stigmas from the drugs we consume. Of course, the biggest hurdle to such a bold move is the adults legislating what is taught in our school systems. If we can clear this hurdle, we’d be doing future generations a great service. Otherwise, we’ll only create more distrust, addiction, and confusion, and we already know what the consequences of that entails.

Tell your boss that cyberloafing is good for productivity

Cyberloafing — or, absent-mindedly browsing the internet — actually has a place in the workday according to this recently published study.