Russian workers are being taught the art of smiling in order to seem more welcoming to the 1.5 million tourists expected to attend the 2018 FIFA World Cup this week in Moscow.

Some employees in the service industry, such as FIFA and Russian metro workers, are receiving crash courses in smiling, how to be more polite, and how to provide directions to popular tourist sites.

“We want to attract more foreign tourists; it’s good for our economy,” Evgenia Zaborskaya, who is leading some of the training, told the BBC. “We just want to show the beauty of Moscow and the Moscow underground.”

Russian people are known for not smiling. It can seem so out of place, in fact, that a smile might even land you being questioned by police. That’s what happened to Yulia Melamed, a Russian film director.

“He said to me ‘because you were smiling,’” she told the BBC. “Because it is strange for a person to walk on the street and smile. It looked alien and suspicious.” 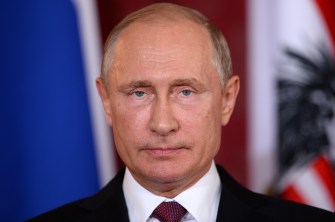 The icy stoicism can make an impression on visitors.

“That’s why when other people come to Russia, they think Russians are not friendly. We need to teach them how to smile. We need to change their attitude,” Elnara Mustafina, a psychologist, told the BBC.

Why the long face?

One explanation is Russia’s level of “uncertainty avoidance,” a psychological concept that describes a culture’s tolerance for uncertainty and ambiguity. As Olga Khazan writes for The Atlantic, the general idea is that as societies become more unstable, or corrupt, it’s harder to decipher people’s true intentions. Therefore, in unstable societies, the confident signal of a smile might be taken as a sign of duplicity, hostility, or ignorance.

Studies that have tested this phenomenon show that people from more unstable countries–Iran, India, Russia–are more likely to judge smiling strangers as being less intelligent. The findings are summed up in a downright ice-cold Russian proverb: “laughing for no reason is a sign of stupidity.”

There’s another explanation for why sporting happy-go-lucky grins never really caught on in the homeland of Dostoyevsky: untold millions of people died in the former Soviet Union throughout the 20th century from war, starvation, or imprisonment in the Gulag camps–smiling in the Red Square must have seemed like an insane, even dangerous act in the worst years.

It took the golden arches of McDonald’s to lighten the mood a bit. In 1990, the company opened its first restaurant in Russia and ushered in a strange new philosophy of customer service: politeness and smiling. On a 2016 episode of the Invisibilia podcast, Yuri Chekalin, a former employee at an early Russian McDonald’s, recalled what customers thought of the friendlier atmosphere.

“Everywhere else you go it was just gloomy and dark and dirty and there were troubles, stress, and you come to McDonalds and it’s–everybody’s always happy and you see smiles. You can’t make any mistakes and you can stay there as long as you want. Nobody’s going to kick you out. And so it was just a great place to hang out. People really felt they could just relax and be themselves.”

The exported happiness from McDonald’s seems to have made a dent in Russia’s service industry. According to the 2016 Smiling Report, which is compiled by the Better Business World Wide from more than 1 million mystery shopper evaluations, Russia ranked 10 with about 90 percent of retail workers smiling. The U.S. ranked 19.

Still, Russians still feel they have a ways to go based on the training its workers are undergoing for this year’s World Cup, which kicks off Thursday.

Domino’s Pizza is fixing America’s roads, one pothole at a time

We, for one, welcome our new pizza overlords.