Edward Snowden wants President Obama to pardon him and, along with his supporters, has launched an extensive campaign to make that happen. The timing coincides with the last months of Obama’s Presidency and the release of a sympathetic Oliver Stone film about the whistleblower. Human rights organizations such as ACLU, Human Rights Watch, Amnesty International and others have joined Snowden’s cause.

His many supporters hope that the high-profile film will help change the minds of many about the divisive figure who was charged in 2013 under the Espionage Act. Snowden’s lawyer Ben Wizner,who is also the director of ACLU’s Speech, Privacy, and Technology Project, felt very positive after screening the movie:

“I think Oliver will do more for Snowden in two hours than his lawyers have been able to do in three years,” Wizner related to Motherboard.

To take advantage of the potentially pro-Snowden climate, the groups that support pardoning him have launched a website – https://www.pardonsnowden.org, which allows his supporters to sign a petition.

The site describes him as “a young American who became aware of a mass surveillance system that had been growing secretly for years without democratic consent. At great personal risk, he blew the whistle.”

The site makes the case that Snowden should actually be deemed a hero since as a result of his actions, “the NSA’s surveillance powers were reined in for the first time in decades”.

A number of celebrities, like Apple’s co-founder Steve Wozniak, actress Susan Sarandon, director Terry Gilliam, Professors Noam Chomsky and Cornel West, and others have lent their voices to the movement for Snowden’s pardon.
Former Presidential candidate Senator Bernie Sanders is generally supportive as well, writing that:

“The information disclosed by Edward Snowden has allowed Congress and the American people to understand the degree to which the NSA has abused its authority and violated our constitutional rights.”

Despite acknowledging the good he has done, Sanders doesn’t advocate for a full pardon, as Snowden did break the law, instead calling for “some form of clemency or a plea agreement that would spare him a long prison sentence or permanent exile.”

This kind of sentiment is similar to the 2014 editorial by the New York Times, which thought the value of what Snowden revealed far outweighed his crime, saying:

“Considering the enormous value of the information he has revealed, and the abuses he has exposed, Mr. Snowden deserves better than a life of permanent exile, fear and flight….. When someone reveals that government officials have routinely and deliberately broken the law, that person should not face life in prison at the hands of the same government.”

Snowden himself lobbied for clemency in an interview with “The Guardian,” stating:

And Snowden believes that his actions had concrete results:

“I think when people look at the calculations of benefit, it is clear that in the wake of 2013 the laws of our nation changed. The Congress, the courts and the president all changed their policies as a result of these disclosures. At the same time there has never been any public evidence that any individual came to harm as a result.” 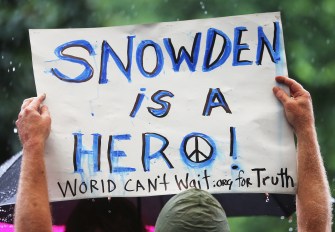 Hoping to ride the groundswell of support, the campaign plans to formally ask President Obama for Snowden’s pardon before he leaves office.

Will Obama do it? Probably not. The President expressed previously that people he would free are ones who were imprisoned during a different time, with different sentencing guidelines, which got them longer prison sentences than they would get today. The Espionage Act according to which Snowden was charged, was passed in 1917 to punish spies and does not provide well for the situation of disposing information for the public good. The law as such has not changed.

Pardons are also usually granted to people who have already served their time, something Snowden clearly did not do.

Obama’s administration also rejected a 2015 public petition for the pardon which had 168,000 signatures by stating that he should have not run away to Russia and instead should’ve come to the US and “be judged by a jury of his peers—not hide behind the cover of an authoritarian regime.”

What Snowden faces if he was to come back to the U.S. are three felonies, including two espionage charges, each carrying a maximum sentence of ten years.

Does the history of pardons bode well for Snowden? Some famous Presidential pardons have included President Gerald Ford’s pardoning of Richard Nixon, seen as a way to help the nation heal. Nixon himself pardoned the jailed Teamster leader Jimmy Hoffa, likely to gain political favor with the unions. The famous socialist Eugene Debs went to jail under the Espionage Act for advocating resistance to the military draft in World War I, and was pardoned two years later by President Warren G. Harding.

While some times used, Presidential pardons are also wrought with danger for the outgoing leader. President Bill Clinton’s pardon of fugitive financier Marc Rich on his last day in office was met with major controversy. Chances are, pardoning Snowden would set off a political firestorm that is not likely to help Democrats as they vie to keep the office of the Presidency. Both Hillary Clinton and Donald Trump haven’t expressed much support for Snowden, with Clinton wanting Snowden to stand trial in the U.S. and with Trump threatening execution.

Cover photo: Edward Snowden speaks via video link at a news conference for the launch of a campaign calling for President Obama to pardon him on September 14, 2016 in New York City. (Photo by Spencer Platt/Getty Images)

Edward Snowden: The Rule 41 Amendment Returns Us to the 1760s

How should we view the amendment to Rule 41? Edward Snowden would have you believe it returns us to a time when a tyrant ruled over America.
The Present

NSA whistleblower Edward Snowden told an audience we should not be “putting too much faith or fear elected officials.” This includes Donald Trump.
Culture & Religion

Edward Snowden Called Out WikiLeaks Over Meddling in U.S. Election

Through a series of election-related email dumps, WikiLeaks played a major role in the U.S. elections.
Hard Science

Why Don’t We Hear From Aliens? They May Encrypt All Their Data.

When Neil deGrasse Tyson recently sat down with infamous whistle blower Edward Snowden, the topic of alien encryption came into the mix.
Up Next
Culture & Religion

A Powerful Way To Beat Addiction

A recent study in Drug and Alcohol Dependence shows the efficacy of mindfulness meditation in overcoming addiction through emotional regulation.