Celebrity deaths have a way of jolting us, as if a part of our life dies with the famous singer or actor. This is especially true when these deaths are untimely, often coming as a result of drug overdoses. Some of our recent traumas include the fatal overdoses by Prince, Michael Jackson, Whitney Houston, Heath Ledger, Philip Seymour Hoffman, and Amy Winehouse. It’s a veritable hall of fame. But for all the famous people whose life is cut short, there are thousands of everyday people who die well before their time by overdosing on drugs.

A new study by the addiction educator Project Know shows that on average, people who die from drug overdoses lose nearly half of their natural life expectancies. That means instead of living on average to 76.4 years, men die at about 41.7 years of age. Instead of living to 81.2 years, women die at 44.8 years.

As we consider lives of unfulfilled promise, we need to come to grips with the fact that we are in the midst of a real epidemic. Americans use and abuse a lot of drugs. Data shows that while making up only 4.6% of the world’s population, Americans consume 80% of the global opioid supply. They also consume 99% of the global hydrocodone supply, and two-thirds of the world’s illegal drugs.

All this drug use results in the the overall number of deaths from overdoses increasing steadily for the past 15 years, with 2014 seeing 47,055 people die, and the mortality rate from overdoses rising faster than other causes of death. Compared to 2001, almost 3 times as many people are dying from prescription drugs (the largest cause of overdose deaths), 42% more from cocaine, and 6 times as many from heroin.

The figures do vary by state, gender, and the drug of choice. Rural areas get more drug deaths than urban area. The overdose stats from the Southwest and Appalachia have been particularly alarming for the past decade. 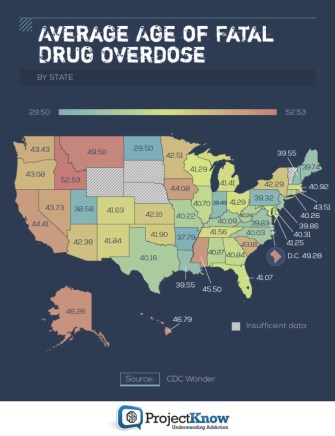 The ages of those who die from overdoses also vary based on where they are. In North Dakota, the average age is 29.5, while in D.C., victims are closer to 50. In general, in the past 15 years, the average age of overdose victims is going up, increasing nearly 7% to 42.

Older patients are at higher risk for abusing prescription or over-the-counter medications with about 25% of older adults using some prescription drug that has the potential for abuse, according to the Administration on Aging and SAMHSA. 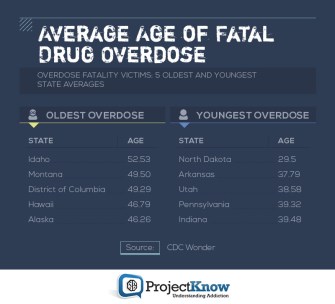 Heroin is responsible for the youngest overdose deaths, both for men and women, with the average ages of 37.65 for men and just 35.99 years for women.

Opioid use by Americans is particularly disturbing and exhibits a racial component. While the mortality rate among black Americans has declined, opioid abuse is particularly responsible for the increase of mortality rates among white Americans. One reason for this is that doctors are found to be more likely to prescribe painkillers to white patients than black patients.

If you are still not alarmed, consider that the overdose mortality rate is going up at a much faster pace than the AIDS epidemic in the 80s.

Project Know previously highlighted drug use by teens, as 50% of 12th graders have used illicit drugs at some point in their lives.

A Real Map of the Middle East

Years of war in the Middle East have erased old borders. Here is what the map currently looks like.