Name five artists. That’s simple, even if you only know the Teenage Mutant Ninja Turtles (Leonardo, Michelangelo, Raphael, and Donatello), you just have to come up with one more. For an art nerd like myself, I started listing all-time favorites, guilty pleasures, and other esoteric lists. But just like most TMNT-laden lists, they all had one thing in common — all men. The National Museum of Women in the Arts hopes to change that with their #5WomenArtists challenge to kick off Women’s History Month 2016 on March 1st. So, are you ready to take the challenge and test your (possibly sexist) art history knowledge?

If you fail the challenge, don’t be sad. You’re not alone. That’s the whole point of the #5WomenArtists campaign. “Through #5womenartists, the Women’s Museum hopes to help the public answer the question — without hesitation — ‘Can you name five women artists?’” says NMWA Director Susan Fisher Sterling. “By calling attention to the inequity women artists face today, as well as in the past, we hope to inspire conversation and awareness. We are excited to invite other art museums to join us in this initiative.” While asking individuals to follow and participate in #5WomenArtists on their Broad Strokes Blog or on Facebook, Twitter, or Instagram, the NMWA asks other museums not as focused on women artists to look into their souls and collections to both highlight art made by women and examine the roots of gender imbalance in the perception and presentation of their art. 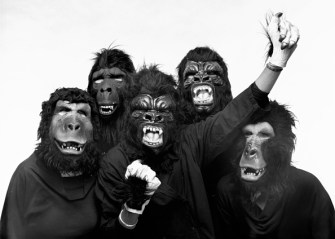 #5WomenArtists essentially continues the decades-long work of activists such as the anonymous Guerrilla Girls (shown above). Since 1989 (with updates in 2005 and 2012), the Guerrilla Girls have tallied the sad statistics of how many women artists appear in the Metropolitan Museum of Art’s collection versus how many nudes are female as a barometer of the lack of progress for women artists. Even more recently, they appeared on The Late Show With Stephen Colbert to talk about the history of art as the history of power. #5WomenArtists hopes to harness the power of social media to overcome traditional male power structures. 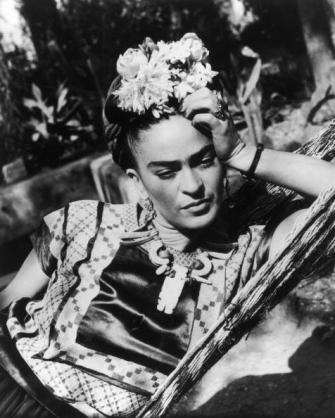 To maintain their anonymity, the Guerrilla Girls borrow names from female artists such as Julia de Burgos, Rosalba Carriera, Hannah Höch, Frida Kahlo, Kathe Kollwitz, and Alma Thomas. Among those names, you may have heard of Frida Kahlo (shown above), but is that because of her art or because of her tragic life story turned into a film? Even Kahlo’s memory languished in the shadow of her husband, Diego Rivera, until the work of Hayden Herrera years after Frida’s death. To rescue other women artists from obscurity, the NMWA will also stage on Sunday, March 6th, its fourth annual Wikipedia Edit-a-thon focusing on improving entries related to notable women artists. If you wonder what you can do to help the cause, consider participating (either in person or online) in that wonderful educational effort. 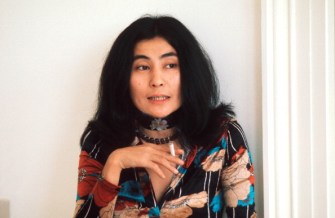 Come up with your #5WomenArtists yet? If you do, make sure to share (and tag) on social media. And when you do, consider who and why you made those choices. Did you include Yoko Ono, for example, because of her long contributions to contemporary art and world peace or because she was Mrs. John Lennon and (allegedly) broke up the Beatles? The “who” is important, but the “why” says more about us than about them. So, take the challenge and learn a little about art history while you learn a lot more about equality.

We are far more worried about the problem of parents not vaccinating their kids than low general vaccination rates for flu, which will sicken and kill way more of us, including WAY more kids.