Mitt Romney dug himself a deep hole this week when Mother Jones released a secretly recorded video of him speaking to a group of millionaires and complaining that 47 percent of Americans “are dependent upon government” and “believe that they are victims.”

Scores of commentators have pointed out Mitt’s bevy of moral and factual errors. The comments constituted a tactical mistake as well: the last thing Romney needs is to burnish his credibility as a plutocrat. A “fail” all around, right?

Wrong. No one seems to have noticed that Mitt was exactly right about this (quotations  from the video transcript):

Conclusion: “What I have to do is convince the 5 to 10 percent in the center.”

A perfect syllogism. Courting independents in swing states is Romney’s best campaign strategy. To win the White House, Romney can and should write off 47 or so percent of voters as already solidly in Obama’s camp. This is Campaigning 101, and it’s Obama’s basic rule as well. Nate Silver’s blog shows eight or nine “tipping point” states where these “5 to 10 percent in the middle” could provide the decisive electoral votes to clinch the election. As Political Scientist John Geer told Doyle McManus, “a billion dollars is chasing 5% of the vote in 20% of the states.”

So where exactly did Romney go wrong? It goes back to Mitt’s utter failure to understand Venn diagrams. Yes, Venn diagrams: those beautiful intersecting circles you learned about in elementary school.

Romney’s Venn trouble first came to light in July, when his campaign released this flyer: 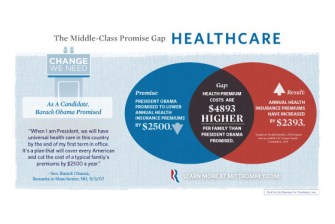 You’ll recall that Venn diagrams are designed to represent a relationship between two factors, with the area in the middle showing where those factors overlap — which characteristics they share. The Romney staff’s diagram does nothing of the sort. As Joe Biden might say, it literally makes no sense. But this one, developed by Upfront, does: 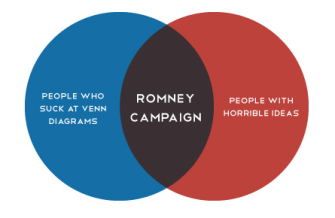 (You can find more Venn fun at Romney’s expense here.)

OK, so how did Romney defame John Venn, along with 47 percent of Americans, at his hedge fund manager fundraiser? After all, Mitt did not actually try to draw any charts that day. The trouble was this: Mitt drew a really screwy Venn diagram — one with two perfectly overlapping circles — in his head. Re-read this passage from his comments:

Need a visual aid? Romney drew this diagram for his audience… 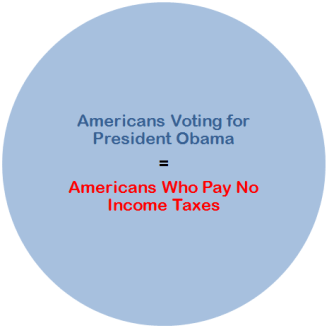 …when reality — where low-income Republican voters over 65 are among those paying no income tax —  looks more like this: 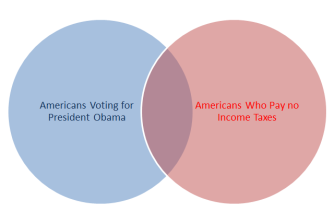 Romney’s illogic is astounding. It’s like saying that since half of Americans are overweight, and half of Americans are men, every single man in the United States needs to go on a diet. Whether Mitt was pandering to his fat-cat audience or suffering a lapse of reason, conflating solid Obama supporters with moochers is inexcusable.

It remains to be seen how costly his gaffe will be among the 5 to 10 percent of American voters he really needs.

“What are you thinking?” is a booby-trapped marriage question. I know this, but I can’t always resist its shiny lure.  My husband John and I were on a long car […]