Hockey and volleyball were my favorites. Other activities I dreaded; I was never big on track. Running around in a circle doesn’t provide the same stimulation as facing down an opponent. Sure, you might be chasing a peer while edging out another, but there’s something primal about staring someone in the eyes while trying to beat them.

As you can imagine, I loved gym class.

In fact, I often point back to gym class (and sports in general) as the reason why I’ve devoted a large portion of my career to teaching fitness. Movement has always been essential. The only other class that provided me with the same fulfillment was English—the worlds I’d get lost in while inside of a good story, not that dissimilar from the very direct and immediate realm of competition. Sports tell stories too. There are heroes and villains; depending on what side of the bleachers you sat on, those roles were fluid.

So I wasn’t surprised to discover that people who hated gym are more likely to not exercise today, as a new study in Translational Journal professes. Over 1,000 men and women (aged 18-40) recounted their experiences in an online questionnaire from Iowa State University about their relationship to physical education. The researchers then linked their responses to their exercise habits today. Those who loved gym tend to remain active, forcing adults today to consider how their children are moving right now.

Movement is an emotional experience. How we relate to our bodies defines our attitude toward various forms of exercise. While I love competition, many others prefer solitary forms of fitness, as the researchers write. In fact, forcing children to compete has scarred many.

Such findings suggest that strongly valenced emotional experiences, such as embarrassment from being chosen last for a team due to lack of skill or pride from being chosen first, may have powerful, long-lasting effects on attitudes and behavior.

One shortcoming of the study is that it relies on “reverse causation.” Sedentary adults might claim to have hated gym to justify their lack of movement now. Our memories are spotty; we always tell the story of how we got to where we are through small fictions that make our current path seem inevitable. If you weren’t good at an activity you likely didn’t try, which is how you become proficient in the first place. The honesty of the responses is open for debate. 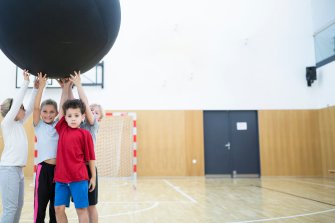 Yet one thing that surprised researchers is just how vivid and emotional these answers were. Gym class provided visceral visions to many minds, years and even decades beyond the experience. Graduate student Matthew Ladwig, who conducted the study alongside Panteleimon Ekkekakis and Spyridoula Vazou, says:

It was a bit surprising just how strong people’s memories were. For some of them, the classes were two or three decades in the past, but they had not forgotten.

The researchers note that we still suffer from an evolutionary adaptation called “negativity bias,” even though its utility is no longer necessary for survival. (We don’t have to remember the patch of ground where we last saw a lion that threatened us, for example.) When involving ego-related issues, however, negativity bias is rampant. Appreciation for PE peaks around ninth grade and then declines dramatically, at the exact moment most teenagers discovering their sexual nature. Feeling inadequate around peers has lifelong effects.

Worrying that the body is being evaluated by critical observers is the essence of the concept of social physique anxiety, repeated experiences of which are negatively associated with PA in adolescence and adulthood. These experiences reportedly occurred most often in the locker room environment, where most secondary school children are expected to “dress out,” a colloquial term for changing into athletic apparel, before and after class.

That’s tragic. I still meet many peers who worry more about what their body looks like than what it can accomplish. Health has many figures, yet culturally we narrow our definition. The locker room mentality persists, even if indirectly addressed.

Children need to move. Adults need to move. Our birthright is movement. Yet, as the Times article cites, a stunning two-thirds of adults in the Western world don’t exercise at all. Thus, we’re an obese world, one in pain and one content to surgically alter what we’re afraid to accomplish through hard work—or emotionally come to terms with our so-called deficit.

Many avoidable diseases clog up hospitals due to this unruly combination of poor diet and lack of movement. Since we’re raised in an environment that focuses more on looks than capabilities, it makes sense we’d end up where we have. The problem doesn’t seem to be improving.

Biomechanist Katy Bowman said it best: none of us are out of shape. We’re all in exactly the shape we’ve allowed ourselves to become. A sound mind is impossible without a sound body. They are not competing factions, but two aspects of one identity. If we don’t teach children that now, we’re only repeating the cycle that got us into the shape we’re currently in.

We aren’t lunarly exclusive. Earth has a few minimoons whizzing around us, including one that comes back into our orbit every 20 years or so.