Moses Fleetwood Walker didn’t have a good game for the Toledo Blue Stockings against the Louisville Eclipse on May 1, 1884. Hitless in four at bats and charged with four errors while playing catcher, Fleet Walker played poorly, but he had a good excuse—death threats. On that day, 132 years ago and 63 years before Jackie Robinson, Walker became the first African-American player in major league baseball. We remember Jackie Robinson each year with special days and retired numbers, but Fleet Walker’s faded into the past in the memory of the public at large. Both Walker and Robinson faced bigotry and abuse to realize their dream of equality on the playing field. Today, the question of who did it first isn’t as important as why baseball’s color line had to be broken not once, but twice. What does that fact say about the “color lines” being drawn today? 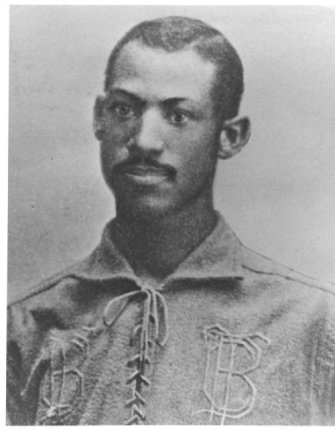 Born in Mount Pleasant, Ohio, in 1856, Fleet Walker (shown above, around 1884, the year he broke baseball’s color line) belonged to the first generation of African Americans who enjoyed the benefits of the post-Civil War racial environment. His father, Dr. Moses W. Walker, was the first African-American physician in that part of Ohio. Fleet’s mother was white, making his origins even more remarkable for the age. Fleet attended segregated schools in Ohio until desegregation finally arrived. Walker’s life, even before that first game, constituted a series of crossing color lines. Sadly, as with baseball, many of those lines were redrawn, including the de facto, illegal re-segregation of Ohio schools until the Civil Rights legislation of the 1960s. After high school, Fleet Walker attended the integrated Oberlin College. In 1881, he joined the college’s first varsity baseball team, along with his younger brother Weldy Wilberforce Walker (team photo at top of post). After starring as Oberlin’s catcher, Fleet moved on to the University of Michigan in 1882, where he studied law and played baseball for one year (team photo shown above). At the time, professional baseball remained in its infancy, with professional teams and professional leagues popping up everywhere. If fact, baseball was too young even to have formulated its racism yet. So, when young Fleet Walker took his talents to Toledo to play for the Blue Stockings in the newly founded professional American Association league, his talent trumped any “unwritten” rules about race. 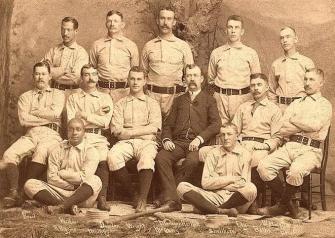 Looking at the integrated team photos that include the Walker brothers, you’d imagine some team racial harmony, but pictures can deceive. Walker’s teammate, the ambidextrous pitcher Tony Mullane, called Walker “the best catcher I ever worked with, but I disliked a Negro and whenever I had to pitch to him I used to pitch anything I wanted without looking at his signals.”  Mullane, who still holds baseball’s record for wild pitches in a career, asserted his “intellectual superiority” by disregarding Walker’s signals, which resulted in the catcher having no idea what pitch was coming—a dangerous idea even now, but almost life-threatening in the era before gloves or any protective gear for catchers. How many of barehanded Walker’s errors came from Mullane and others’ views is unknown, but at least one pitch by Mullane broke one of Walker’s ribs, forcing him to miss a large part of the season injured. 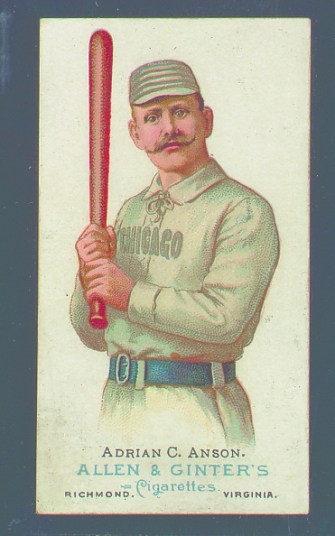 Hotels and restaurants often refused service to Walker when his team travelled, especially in the South, where Fleet would sometimes sleep on park benches the nights before games.  Crowds shouted slurs and death threats arrived steadily as they travelled to each new town.  But the man who became Fleet Walker’s true nemesis is none other than Baseball Hall of Famer as the first player to achieve 3,000 hits, Adrian C. “Cap” Anson (shown above). In 1883, before Toledo entered the professional league, Anson’s Chicago White Stockings visited Toledo to play an exhibition game.  Anson refused to play if Walker played.  Anson only relented when Toledo’s owner threatened to withhold Chicago’s share of the gate.  Ironically, Walker was scheduled to rest that game (a common occurrence in an era when catchers needed to rest their battered hands after a day of catching baseballs barehanded), but Toledo’s manager played Fleet in the outfield just to spite Anson.

In 1887, Anson struck again, this time more permanently.  Injury and, perhaps, other issues led Toledo to release Fleet Walker by the end of 1884.  He bounced around the minor professional leagues for several years in hopes of returning to the majors.  Fleet’s team, the Newark Little Giants of the International League, featured not only Walker as catcher, but also a great African-American pitcher, George Stovey.  Anson, now the Chicago manager, not only refused to play again, but colluded with other managers in the International League to no longer sign African-American players.  The unwritten rule against African-American major league baseball players was now written down on July 14, 1887. 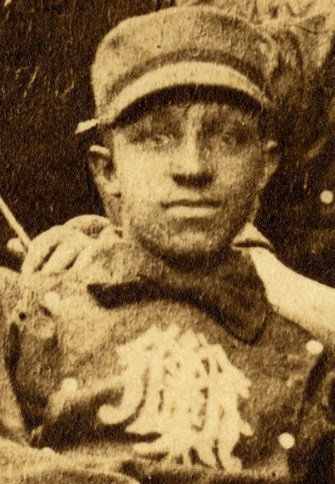 At the time of the racial ban, thirteen African Americans were playing in minor professional leagues, including Fleet and his brother Weldy (shown above), who was playing for the Akron Acorns of the Ohio State League.  When the bans spread across the country, Weldy wrote an open letter published in the March 14, 1888 edition of The Sporting Life titled “Why Discriminate?” “The law is a disgrace to the present age, and reflects very much upon the intelligence of your last meeting, and casts derision at the laws of Ohio – the voice of the people–that say all men are equal,” Weldy Walker wrote. “There should be some broader cause–such as lack of ability, behavior and intelligence–for barring a player, rather than his color.”  For intelligent, talented men such as the Walker brothers, the arguments that African-American players weren’t smart or talented enough to keep up with white players rang hollow. 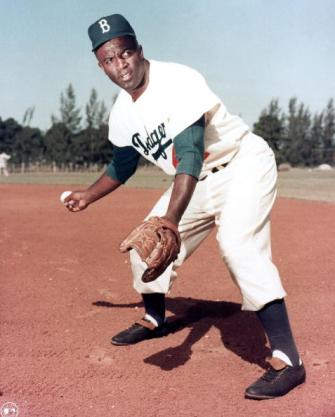 Why do we not remember Fleet and Weldy Walker, yet remember and lionize Jackie Robinson (shown above)?  Perhaps the Walker brothers’ post-baseball lives have something to do with it.  Whereas Jackie Robinson kept his politics to himself and held his tongue while assimilating (letting his playing do the “talking”), the Walker brothers became highly political after baseball.  In 1908, after editing their own newspaper The Equatorfor six years, the brothers published a 47-page pamphlet, Our Home Colony: A Treatise on the Past, Present, and Future of the Negro Race in America, to support the Back-to-Africa movement.  “The Negro race will be a menace and the source of discontent as long as it remains in large numbers in the United States,” Our Home Colony argues. “The time is growing very near when the whites of the United States must either settle this problem by deportation, or else be willing to accept a reign of terror such as the world has never seen in a civilized country.”  Send us back to Africa, the treatise cries out, if you won’t accept us in America.  For those uncomfortable with the more militant elements of #BlackLivesMatter, the Walker brothers’ writings sound like a very familiar, very honest threat. 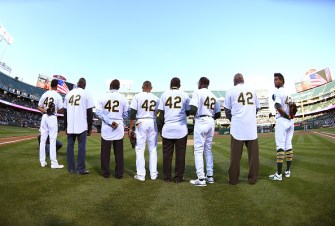 Compared to Jackie Robinson (celebrated during Jackie Robinson Day above), Fleet Walker seems an uncomfortable reminder of the first failures of post-Civil War civil rights for African Americans.  The promise of Reconstruction died in 1877 to be replaced with Jim Crow laws that would hold sway until the Civil Rights Movement of the 1950s and 1960s, which viewed Robinson as a peaceful pioneer to emulate.  The story of Fleet Walker’s breaking the color line only pointed out that the color line had to be broken again and suggested, perhaps, that it would have to be broken once again in the future.

Efforts have been made to remember the achievement and lesson of Moses Fleetwood Walker’s life, including a bobblehead of the player (shown above).  New research suggests that William Edward White, who appeared in 1879 in one game for the Providence Grays while passing as white, may have been African American and, thus, the first to cross the color line, however briefly and deceptively.  But Fleet Walker (and his brother Weldy) crossed it more honestly, lasted much longer, and fought back much harder.   The story of Fleet Walker needs to be told and recalled because it reminds us that racial progress has never been linear.  It’s always been a series of advances and regressions, with attitudes often lagging behind legislation strongly enough to sometimes reverse that legislation.  Standing here in 2016 America, in a country and election cycle dominated by racial questions, remembering that Jackie Robinson wasn’t the first should inspire us to make sure he’s the last.

Subscribe for counterintuitive, surprising, and impactful stories delivered to your inbox every Thursday
Related
L&D Strategy

The biggest question about the beginning of the Universe

“Where did it come from” is pretty high up there!“Space is certainly something more complicated than the average person would probably realize. Space is not just an empty background in which […]