At an average of $55,000 per year in tuition, many students who enter NYU’s School of Medicine end up following a career path that takes them into a high-paying specialty to offset their loans of $200,000 to $400,000.

With that in mind, NYU has decided to offer free tuition to students, regardless of need, encouraging them to go into family medicine, pediatrics, and research instead. The announcement came at the end of the White Coat Ceremony, where each student is issued their white coat, symbolizing the beginning of their journey. 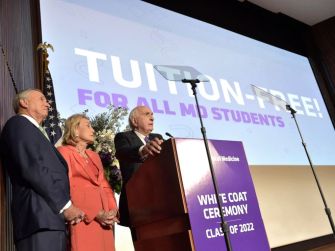 New York University’s School of Medicine announces it is offering full-tuition scholarships to all current and future students in its MD degree program, regardless of need or merit, Aug. 16, 2018. Image credit NYU School of Medicine.

“I’m proud to announce that as of right now, every student that we admit to New York University School of Medicine comes tuition-free,” Kenneth G. Langone, chair of the board of trustees, declared in a video announcement on Thursday. “And this includes the incoming class and the upperclassmen as well that are here right now—no more tuition. They walk out of here unencumbered, looking at a future where they can do what their passion tells them, which is to help people live better quality lives,” he added.

It’s possible that other top medical schools will follow suit in order to remain competitive; for now, this will be the only top-ranked medical school that will do so.

The plan, which will cover the standard tuition of approx. $55,000 per year, will not cover room and board or fees, which average $27,000 per year.

“This decision recognizes a moral imperative that must be addressed, as institutions place an increasing debt burden on young people who aspire to become physicians,” said Robert I. Grossman, dean of the medical school and chief executive officer of NYU Langone Health.

To cover tuition, the university has raised three-quarters of the expected $600 million needed from private donations and grants.

The NYU announcement comes on the heels of another popular medical school, the Columbia College of Physicians and Surgeons, announcing in December a $250 million fund to pay for tuition for all future medical students.

After speaking with the world’s “top business leaders”, President Donald Trump has asked the SEC to study the potential impacts of removing rules that require companies to file reports with the agency every three months.