Americans received disturbing news in December 2017: for the second straight year, national life expectancy dropped, reversing a 20-year streak of increased longevity. Some believe this is due to the opioid crisis, which claimed over 64,000 lives in 2016—a statistic that continues to rise.

Of course, while opioid addiction now kills more Americans than breast cancer, other factors are in play, many related to another epidemic: obesity. Heart disease, cancer, stroke, and dementia are still major killers, while opioid deaths fall under “unintentional injuries,” the third-leading cause of death in the nation.

While there are myriad reasons why we die, looking outside of purely physical correlates makes sense. Psychological health and physical health are not separate domains. What you believe affects bodily processes, as these incredible experiments showed. The placebo effect is another prime example of this.

What role does religion play in health and longevity? This question has long been debated, with the religious claiming that their faith keeps them healthy. But is this the case? The data appear to show the opposite. 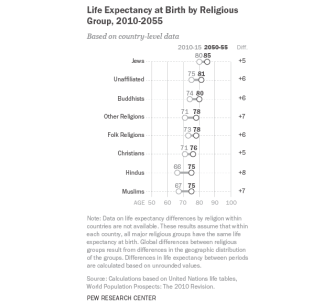 Thus we enter the confusing and contentious argument over economics and religion. Poorer countries tend to be more religious, perhaps reflecting the idea that redemption lies ahead since the present is not sufficient for sustaining life. The more economically developed a country is, the less religious its citizens. Even though Americans are dying earlier, economic prosperity has created a large contingent of atheists.

The social argument for religion—religious adherents are healthier due to their participation in a community—holds up, but is religion really the key factor? Crossfit and yoga communities offer similar benefits with an added incentive of physical activity. Social connection appears more important than belief in any system.

Which might be why a Pew study awards the religiously unaffiliated (atheists and agnostics) with the second-longest lifespan of any group, finishing just behind Jews and just ahead of Buddhists. Interestingly, all three of these groups tend to rely less on metaphysical ideas and more on community and best practices while alive. The three lowest-performing groups—Christians, Hindus, and Muslims—veer in the opposite direction, with much more reliance on the afterlife and dualistic philosophies, i.e. belief in a soul or spirit that continues after physical death.

This is a generalization not applicable to every member of each group. Plenty of Hindus and Muslims are casual observers that rely on their faith for cultural identity alone. Observant Jews and Buddhists pray to deities and meditate on the afterlife. On a larger scale, however, the latter groups tend to be more devotional in nature and practice than those with the longest life expectancies.

Beyond belief, economics appears to be the main driver for life expectancy. As Julia Belluz at Vox reports:

There’s one group in the US that’s actually doing better than ever: the rich. While poor and middle-class Americans are dying earlier these days, the wealthiest among us are enjoying unprecedented longevity.

This is disturbing news to the faithful, but from a bird’s eye view, it makes sense. If your basic survival needs are taken care of, the need for faith decreases. Life is already working out in your favor. Again, a generalization—millionaires can exhibit plenty of faith—but when you have access to top healthcare, organic food, and time and money for physical fitness, there’s less of a chance existential dread will kick in. 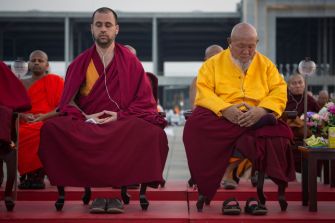 Foreign monks seen meditate during the yearly Makha Bucha ceremony in the north of Bangkok. (Photo by Geem Drake/SOPA Images/LightRocket via Getty Images)

Not so if you live in a region plagued by malaria, droughts, AIDS, flooding, and other diseases and environmental catastrophes. The yearning for something better (or other) has long been a part of our psychological make-up. You’re more likely to identify with a glorious afterworld when this one isn’t working out so well.

Does religion follow economics or do certain economic realities manifest around particular religious ideologies? The former seems more likely, though that is speculation, an especially contentious one given how intimate faith is to some and how defensive they can become when their ideas are challenged. Factor in atheists and agnostics near the top of the list above, throwing a wrench into the whole idea of longevity and faith.

This topic requires the implementation of an important moral principle: humility. When dealing with religions of the afterworld, Christians, Muslims, and Hindus can’t all be right, if we go by the guidelines professed by each faith. This has always made for sticky dialogues, even among the more tolerant religious. If you sincerely believe Jesus is the only way to heaven, well, anyone not on board is cast out. And that “us vs them” mindset might not prove to be healthy in the long run.

Does this mean that focusing on the present rather than a supposed afterlife makes for better practices while alive? It just might be so, going by these data. You can only help yourself by paying attention to your health now. Putting it off for a perceived future does not make for a fruitful life today.

Is marijuana legalization really linked to an increase in fatal car crashes?

April 20, 4:20 in stoner folklore, is a day of celebration—as well as a 12 percent increase in fatal car crashes.