An exposé in this week’s issue of The New Yorker on the surprising depth of jihadist poetry should be required reading for everyone on the swelling list of candidates for president in 2016. As that list continues to lengthen, particularly on the ludicrously crowded Republican side, everyone is talking about the so-called Islamic State, or ISIS, and how to defeat it. No candidate, however, is saying anything that’s particularly worth listening to. And no one seems to appreciate the finer points of the Islamic State’s success, or how to confront its cultural roots.

The Democratic candidates are largely toeing President Barack Obama’s line, which is to continue the nearly yearlong bombing campaign designed to limit the spread of ISIS by degrading its resources and killing its fighters. Hillary Clinton, the presumed nominee, says that American troops should not be deployed on the ground but that the United States “Air Force, but also Army soldiers from the region, and particularly from Iraq,” should combine to battle ISIS in what promises to be a “long-term struggle.” Bernie Sanders, the irascible senator from Vermont, has much the same message. “I think we’ve got to continue air strikes,” he says. “I think we’ve got to use special operations forces when we can. But I do not want to see a never-ending quagmire in the Middle East where our troops die, come back with terrible illnesses, and we end up spending trillions of dollars.”

This stay-the-course line isn’t terribly revealing. But when examined alongside the rhetoric on the Republican side, it sounds at least tolerably sane.

In announcing his presidential bid, Rick Santorum, the runner-up to Mitt Romney in the 2012 Republican nomination, drew cheers when he declared that his photo had been featured in an ISIS publication. “After 12 years of legislating and warning about the gathering storm of radical Islam, they know who I am and I know who they are,” he quoted himself as saying. And then the gauntlet came down: “Ladies and gentlemen, if I’m the next president, we will defeat them.” No details on how that might happen. Mike Huckabee contends that “moral clarity” is enough to defeat the enemy. Knowing the “difference between right and wrong, good and evil … is the foundation to our economic and military strength.” Rand Paul simply says, “I will do whatever it takes to defend America from these haters of mankind.”

Businessman and perennial candidate Donald Trump thinks being the toughest guy in the roomis the way to go: “On ISIS, nobody, if I decide to run and win, nobody would be tougher than Donald Trump. I would hit them so hard and so fast that they wouldn’t know what happened.” Hard and fast. How would he do this? “I would find a general. Remember the old days of … these great generals? … General [Douglas] MacArthur is spinning in his grave when he sees what we did. So you gotta hit them hard, gotta hit them firm.”

One GOP candidate offers a tad more than moralizing or bravado as an anti-ISIS strategy. Lindsey Graham notes that “radical Islam is running wild” because “they have more safe havens, more money, more weapons and more capability to strike our homeland than any time since 9/11.” Jihadists may be “large, rich, and entrenched” today, but “as president I will make them small, poor, and on the run.” Graham says that “to defeat this enemy, it will require more than military might. The most powerful weapon in our arsenal isn’t a gun. It’s an idea. The terrorists are selling a glorious death. We must sell a hopeful life.”

“Battle Lines,” the New Yorker article by Robyn Creswell and Bernard Haykel, shows that neither tough talk nor tossing notes bearing American principles of freedom and democracy into ISIS strongholds in Iraq and Syria is likely to have much effect. The Islamic State is not just about beheadings and burning infidels alive. It has a soul. And it has something akin to a poet laureate in the person of Ahlam al-Nasr.

Al-Nasr, Creswell and Haykel report, “is a burgeoning literary celebrity, better known as ‘the Poetess of the Islamic State.’” Notably, al-Nasr is a woman, and she published a book of verse online in 2014. You won’t hear presidential candidates referring to Islamic poetry, but the “huge amount of verse” produced by jihadist movements holds keys to understanding what makes ISIS tick. Creswell and Haykel explain:

Analysts have generally ignored these texts, as if poetry were a colorful but ultimately distracting by-product of jihad. But this is a mistake. It is impossible to understand jihadism — its objectives, its appeal for new recruits, and its durability — without examining its culture. This culture finds expression in a number of forms, including anthems and documentary videos, but poetry is its heart. And, unlike the videos of beheadings and burnings, which are made primarily for foreign consumption, poetry provides a window onto the movement talking to itself. It is in verse that militants most clearly articulate the fantasy life of jihad.

The article is worth reading in full, both for presidential candidates and for the people who will be considering voting for them. Here is one example of al-Nasr’s work revealing what Creswell and Haykel call the “visionary cosmopolitanism” of the Islamic State: its disdain for the nation state and the borders that divide them. For ISIS, Muslims anywhere and everywhere are brothers and sisters of the movement: 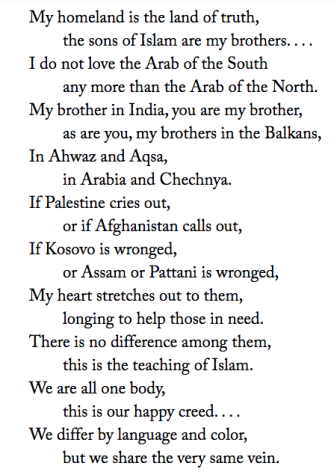 It’s time to get past the idea that the Islamic State is simply a bloodthirsty collection of extremists. Recent reporting in The New York Times reveals that ISIS is methodical in its violence: a champion of Sunni interests but brutal toward rival Sunni groups and Westerners who cross their path. They temper this Machiavellianism with a softer side that builds loyalty and wins the hearts and souls of the people in their grasp. Until American leaders understand the multi-dimensional threat and appeal of ISIS in the Middle East, strategies for fighting them will remain shallow and — at best — partially effective.

George Zimmer, famous for his familiar beard and iconic commercial catchphrase, is attempting to disrupt the tailoring industry with a new venture.