The iPhone X was doomed to fail. In a saturated market, selling a thousand-dollar premium phone was a stupid decision, bound to cost the company a large percentage of market share. Such doomsaying was common for the first few months of this year—until Apple announced that for the first time in any first quarter, the premium phone was their bestseller, that is. Tim Cook declared the X a Super Bowl winner.

All told, Apple sold 52.2 million phones in Q1. Though Cook lightly scolded the media after the company’s victory, some analysts still believe a decline is inevitable. Of course, in a big-picture sense, this is true: believers in unlimited growth eventually have their Icarus moment. But how will the demise come about? Android? Galaxy? The realization of psychic powers that renders wireless technologies mute?

How about a phone that does little more than make phone calls? That would certainly not seem like a revolutionary technology. And yet 10,000 users purchased the Light Phone, a smartphone-sized phone whose sole purpose is to dial out and receive phone calls. Deciding that such a simplistic device might be just a wee bit too simple, the makers are returning with Light Phone 2, a phone that also sends text messages, stores contacts, and has an alarm. In a few short weeks, the company hit 616 percent of its target goal, clearing over $1.6 million.

We’re all familiar that Steve Jobs didn’t treat the iPhone like a phone; he viewed it as a computer that happens to make phone calls. That’s essentially what every smartphone has become. For most users talking on their phone is one of the least useful utilities. I have friends whose voice mail has been full for years. They’ve simply stopped using that function.

To accommodate consumers and their sense of novelty, every iteration of each new phone now has to promise something greater. Perpetual progress demands a blood sacrifice. It just so happens that what’s sacrificed is our attention. Creating new and ingenious avenues to exploit cognitive real estate is essentially what the smartphone market has turned into. You’re certainly not going to see any major corporation market their new device by claiming it makes really good phone calls.

Which is the market Light Phone 2 is catering to. Not completely heartless, the makers are considering basic services like playlists (streaming or mp3s remains a mystery), maps, and the ability to conjure a ride home. They’re even considering bluetooth. My favorite “maybe”: calculator or dictionary. Because, of course, both would be a travesty. 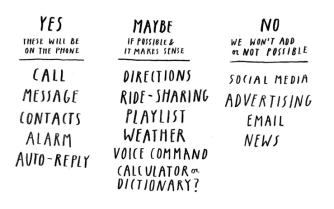 Light Phone 2 isn’t the only phone appealing to the minimalist market. Unihertz’s Jelly is marketed as the “smallest 4G phone” on the market. The Android model might be miniaturized (“amazingly cute”), but it has most smartphone capabilities we’ve grown accustomed to. Yet it’s size is purposefully prohibitive:

Its approach to smartphone moderation is to make the process of using it difficult enough that, in more marginal cases, it’s simply not worth it. It’s an engagement machine with the resistance turned up as high as possible. Messages become shorter. Reading becomes more deliberate. An idle check of the phone is associated less with the rush of refreshing an app than with the tedious process of opening one in the first place.

While none of these phones are likely to ever compete with the big players—the Jelly’s $3 million crowdfunding campaign doubled the revenue of Light Phone 2, yet it’s still not $53 billion a quarter—it is indicative of a parallel mindset with recent social media expats: we’re getting tired of being distracted all the time. It’s exhausting, this never being turned off. The fact that tens of thousands of people are choosing “dumber” phones is the inevitable consequence of market overreach.

Ironically, there is an even simpler solution. Instituting it is another story. As the Times article linked to above states, “If we want to escape, it won’t be another phone that gets us out.” I recently witnessed this phenomenon while traveling with my wife on our delayed honeymoon. In each country we visited in Southern Europe, I was reminded of a longstanding practice in these cultures: the ritual of eating.

In two weeks I never noticed one person at any restaurant on their phone, except to share something with the table. Meals lasted for multiple courses, unfolding over hours. Conversation never lacked. Everyone has a phone, of course; they’re just not distracted by them. They remember what’s important in life: actually sharing their time with those around them, not “sharing” their lives with other avatars.

Is such a ritual possible in America? First, we must recognize that no technology is going to produce it, which means no app will provide instructions. A dumber phone might help, but the problem isn’t really the phone. Until we realize that, it’s impossible to consider how progress will be made. That said, a lighter phone won’t hurt.

Daily dose of baking soda may help against autoimmune diseases

It might not be a great idea to chug a whole box of Arm and Hammer, but a small daily dose could do wonders for keeping your autoimmune system in check.