Here is the current leaderboard for the ISTE conference keynote crowdsourcing project. Jeff Piontek has widened his lead a bit more over Chris Lehmann. Alan November has claimed the lead in a category and Karl Fisch is pulling away from Michael Wesch.

Does it matter if a nominee nominated himself? Does it matter if family members are voting for a nominee? When by all accounts the nominee is an exceptional educator and speaker, I don’t know if these matter or not, but I’ve heard some backchannel grumbling…

I’ll try to post a daily update between now and December 15. Have you voted yet? 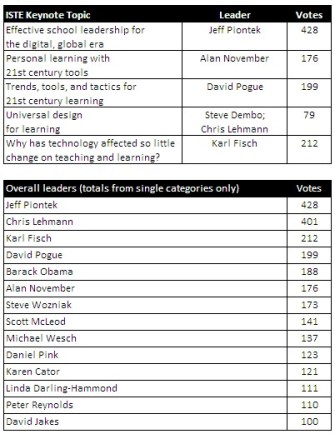