There are big eruptions, then there are big eruptions. On April 10, 1815, Tambora, a volcano in Indonesia, produced one of the largest eruptions in human history. This eruption produced what became known as the “year without a summer” after the volcanic aerosols from the eruption produced some of the coldest summers in many parts of the world. The Tambora eruption in 1815 was a VEI 7, on a scale that goes to, well, 7*, putting it in a class of some of the largest and most violent eruptions imaginable – and I, for one, can hardly imagine what might happen if an eruption of this magnitude occurred today.

(*, OK, technically it goes to 8, but those are for eruptions that have never happened in human history, those 1000 cubic kilometer behemoths like Yellowstone.)

Tambora from the International Space Station

Lets get some facts out there about the eruption (taken from Stothers, 1984), just to give us some prespective:

Now, that is an eruption that none of us have even come close to experiencing in our lifetime (so far). Tambora – the volcano – was though to be inactive at the time of the eruption. In fact, prior to 1815, the last known eruptive activity was around 740 A.D., although the volcano has shown signs of life as little as 3 years before the cataclysmic 1815 eruption. Since then, Tambora has had two known minor eruptions in 1880 and 1967, both VEI 2 or smaller. 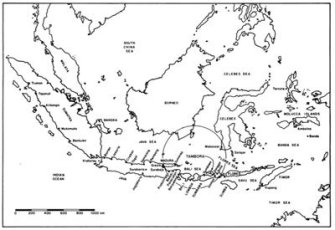 The location of Tambora, map from Stothers (1984)

Timeline of the Eruption

The “Great Eruption” produced a what is known as the “Year without a Summer” in 1815 and 1816. The eruption itself is thought to have released 175 trillion kilograms of sulfur aerosols. The ash/dust signal was recorded in both the Greenland and Antarctic ice sheet in tracers like Ba, Bi and Pb concentration, precipitation acidity and other climate tracers. The effect of all these aerosols was a drop in average global temperature between 0.7 and 3 degrees (C), while warming the stratosphere by as much as 15 degrees (K). You could fill volumes with the events of the “Year(s) without a Summer,” but I’ll just sum it up by saying that Tambora caused an great deal of turmoil – crop failures, famine, acid fogs, cold winters, vivid sunsets and haze throughout the northern hemisphere as far as London, Russia, the United States and beyond. These effects remained for possibly as many as 4 years after the eruption. The eruption had cultural results as the dreary summers in Europe in 1815-16 prompted Mary Shelley to write Frankenstein and allowed J.M.W. Turner to paint some of the stunning sunsets (below) in England during those years. It is interesting to note that Tambora is likely not the only culprit, as 1815-16 also featured a very weak solar maximum that could have caused some of the cooling. Geologists like Haraldur Sigurdsson has been researching the destruction of villages near the volcano (althought “Lost Kingdom” might be a little overstated.)

This barely scrapes the surface of the Tambora 1815 eruption and its effects. If you really want to wade into the eruption, you can check out the following sources:

Related
Life
Visualization test
Lorem ipsum dolor sit amet, consectetur adipiscing elit. Nullam id tincidunt mi. Morbi malesuada nulla sit amet est hendrerit tincidunt. Etiam viverra, nisl id volutpat eleifend, est augue sodales orci, […]
L&D Strategy
Transfer of learning: The necessary step to make learning stick
Transfer of learning is a concept that should be top-of-mind when planning any learning and development program. Why? In a perfect world, the billions of dollars organizations collectively spend every […]
Starts With A Bang
Why we’ll never see back to the beginning of the Universe
We thought the Big Bang started it all. Then we realized that something else came before, and it erased everything that existed prior.
Thinking
Is there an afterlife? See how your answer compares to polled Americans
There is more consensus on what heaven looks like than hell.
Thinking
How science changes the way we think, according to 10 leading scientists
A group of prominent scientists shares how research has changed them.
Up Next
Guest Thinkers
SI/USGS Weekly Volcano Activity Report for 4/1-7/2009
Get Google Earth placemarks for the Weekly Volcano Activity Report.