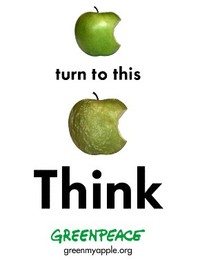 According to Greenpeace’s latest “Green Ranking” (released on Wednesday), Chinese PC maker Lenovo is the world’s most environmentally conscious electronics maker. The lowest-ranked company on Greenpeace’s list is, surprisingly enough, Apple. This is not to say that people will start boycotting Apple stores anytime soon, but it should give the company an extra incentive to green up its business model:

its recycling and toxic content policies, Greenpeace said in its report. The environmental group started publishing the list

in August 2006. Apple also was taken to task by Greenpeace for failing

to release the full list of regulated substances it uses, and for

refusing to provide timelines for eliminating use of the most toxic

In addition, Apple “performs poorly” in product take-back and

recycling, Greenpeace said. The only positive for Apple is that it

reports on the amounts of its electronic waste recycled.”

As might be expected, Apple wasn’t accepting the low ranking without a bit of a challenge:

with Greenpeace’s rating and the criteria they chose,” a company

spokeswoman said. “Apple has a strong environmental track record, and

has led the industry in restricting and banning toxic substances, such

as mercury, cadmium, and hexavalent chromium, as well as any BFRs.

between bronze and gold. The organization evaluates products based

international standards set by the Institute of Electrical and Electronics Engineers.