This week I welcome Dr. Ed Kohut as a guest blogger here on Eruptions (while I am off in the Sierras doing some field work). I’ve known Ed for 10 years now – we were both graduate students in igneous petrology at Oregon State University – and we are both Massachusetts natives. Ed was in the Coast Guard before getting degrees at University of Rhode Island and Boston University before heading of to Oregon State for a Ph.D., where he worked on melt inclusions in minerals. One of his major research areas is magmatism in the Mariana Islands and he was nice enough to put together a look at the Marianas for Eruptions – this is Part 1. Enjoy!

Big thanks to Erik for inviting me to post a bit on the Marianas. I have been working in the Marianas since 2001 and I have to extend gratitude to Sherm Bloomer at OSU and Bob Stern at UTDallas for not only getting my involved to begin with, but also for keeping me involved. I hope to show that there is a lot more to the Marianas than just the trench.

If you look at a map or a globe, you will see many long chains of nearly regularly spaced islands, particularly in the Pacific. Some of the chains are curved to form an arc shape, and are the origin of the term island arc. Since these islands are largely volcanic, they are also the source of the geologic term “volcanic arc”. These arcs are the volcanic expression of subduction zones (more on that later). The Western Pacific is home to several of these arcs, including the Marianas.

General location map of the Mariana Islands in the Pacific Basin. Click on image to see a larger version.

The Marianas Islands lie south of Japan and run ~750 km from Guam to the Bonin Islands. The larger southernmost islands (Guam, Rota, Saipan, and Tinian), are uplifted volcanic and carbonate rock and are not part of the active volcanic arc. The more northern islands are active volcanoes that have built up from the seafloor. Several of the larger submarine volcanoes were historically noted as shallow banks. The Marianas are part of an extended series of three subduction zones, Izu, Bonin and Mariana, that are known as the IBM system and are the focus of ongoing research.

First, a little human history. Geographically the islands are part of Micronesia and the original inhabitants are the Chamorros. The Chamorro way of life dramatically changed on March 6, 1521 when Ferdinand Magellan landed in Umatac Bay, Guam during his expedition’s circumnavigation (crazy as it sounds, Guam was the first land they touched since leaving South America). Spain eventually formally claimed the islands in 1667, ushering in 231 years of Spanish rule. Defeat in the Spanish-American War forced Spain to cede Guam to the U.S. in 1898 and sell rest of the islands were to Germany. As a result of Germany’s defeat in WWI, Japan was given the northern islands as a League of Nations Mandate. Guam was taken by Japan on Dec. 8, 1941. Major battles in 1944 resulted in the destruction of Japanese naval air power and bloody amphibious assaults on the Guam, Saipan and Tinian. Tinian became a major U.S. airbase and the atomic bombing missions in 1945 originated from there. After the war, Guam returned to U.S. territorial status and the northern islands eventually became the U.S. Commonwealth of the Northern Mariana Islands. During the period of recorded history, eruptions have occurred on Asuncion, Agrigan, Pagan, Guguan, Sarigan and Anatahan Islands.

The reason for the islands and the volcanoes is the process of subduction. To get subduction you need to have two plates converging, plates being the crust and uppermost mantle, called the lithopshere . The lithosphere is above another layer of mantle called the asthenopshere, where the rock is at just the right pressure and temperature to flow over time and help move the plates. One plate then begins to go down under (subducts) the other. The leading edge of the continental plate must be basaltic oceanic crust, continental crust is less dense and too buoyant to go under the mantle. In the Marianas the Pacific Plate is subducting westward under the Philippine Plate. As the subducting plate (or slab) sinks, it slowly warms. Water in crust, in minerals, and in any sediments along for the ride is released in to the mantle of the overlying plate. This water forms new minerals that are then dragged deeper as the process continues. Around 80-120 km deep, these minerals breakdown and release the water into the surrounding mantle rock. At this depth, water promotes melting of the rock and we have magma. Since this occurs at same depth along the subduction zone a chain of volcanoes develops. The magmas start off with abundant water and CO2, and are often thicker andesitic and dacitic magmas that will hold onto the volatiles until reaching the surface. As a result, subduction zone arc volcanoes often produce explosive Vulcanian to Plinian events.

Schematic cross section of the Mariana Islands subduction zone. Click on the image to see a larger version.

Looking at the cross-section, you’ll notice a couple of other features. Where the plates meet a depression forms in the seafloor – a trench. The sides of the trench are not as steep as imagined since drawings often have vertical exaggeration, they are usually around 8 to 10x wider than they are deep. The Marianas Trench is famous as the deepest point in the Earth’s oceans (10,916 meters or 35,814 ft). Beyond the trench is the forearc, an area of compression, folding and thrust faulting. Huge megathrust quakes such as the 2004 Indonesian quake and resulting tsunami originate in these areas. Then we have the arc itself. Behind that there may be an area of rifting appropriately named the back-arc basin. Back-arc basins operate much like mid-ocean ridges, but exist for different reasons. In the Marianas, the Phillipine Plate itself is subducting on its NW edge and being pulled in that direction at the same time it is converging with Pacific Plate: 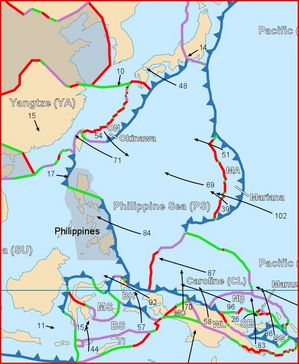 Plate motions at the Philippine Sea. Click on image to see larger version.

The difference in movement creates tension within the Marianas Subduction Zone, resulting in a rifting of the arc not once but twice. Rifting of the old arc left fragments in the present fore-arc, these bits have been uplifted to form the Guam, Saipan, Tinian and Rota. The arc began rifting again ~7 million years ago and eventually opened to form the current Mariana Trough back-arc basin (not to be confused with the Mariana Trench!) 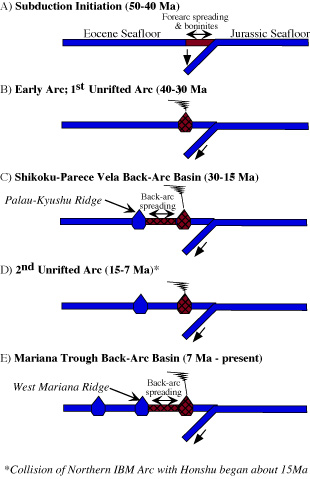 Subduction history of the IBM.

The Marianas, together with the rest of the IBM, is largely free of interaction with continental crust and sediments. As a result, the cycling of water, CO2, chlorine, sulfur and silicate material between the mantle , crust, oceans and atmosphere in subduction zones can be examined and all stages of back-arc development are present in the IBM as a whole. The Marianas then are much more than a deep spot in the oceans and are an exciting place to visit and work.

Next I’ll give you a tour of the volcanoes!

A state senator in California has decided that the designation of serpentine as the state rock is the biggest problem facing the state today.