Our tour of the Marianas begins SW of Guam. In this area the volcanoes are submerged and make up a region known as the Southern Seamount Province. Our first stop is Tracey Seamount, which lies 30 km west of Guam. Tracey is a ~2 km tall cone and volume of ~45 km3 It is one of the smaller volcanoes in the Mariana arc; Pagan, contains about 2200 km3 of material (Bloomer et al., 1989). It has a sector collapse on its western flank and resembles a submarine Mt. St. Helens. It was investigated by the ROV Hyper-Dolphin from the R/V Natsushima in Feb. 2009, which revealed that the cone is map up of alternating pyroclastics and dacite built on a basaltic-andesite base. A dome of dacite has formed in the collapse area. It is still considered active and that along with its proximity to Guam and its history of sector collapse suggest an underappreciated risk to the island.

Map of the volcanoes of the Marianas Islands.

Next up is West Rota. This is a large submarine caldera 40 km WNW of Rota. In fact it is the largest caldera in the IBM system, similar in size to Crater Lake in Oregon. Found in the caldera are large balls of rhyolite that are inferred to be rhyolite “balloons” that may have actually floated for a time after erupting (Stern et al. 2008). The youngest material dated so far is 37,000 years old, but there is evidence of current hydrothermal activity.

64 km of Rota and west of the main arc is the small but notable submarine volcano NW Rota 1. It is notable for being the site of the first directly observed deep submarine eruption. In 2001 it was dredged (my first cruise), but nothing unusual was noticed. In 2003 NOAA scientists detected an acidic plume above the summit. Subsequent dives by ROVs in 2004, 2005, 2006 and 2009 found continued vigorous activity, including sulfur-rich plumes, occasional small explosions and density flows of tephra down the flanks. The material being erupted is basaltic-andesite and despite the non-stop activity, no evidence has ever been observed on the surface that anything is going on down below. NW Rota is also the home to a rich ecosystem of shrimp and other organisms that are dependent on sulfur-loving colonies of chemosynthetic bacteria.

Further to the north we enter the Central Island Province, but not all volcanoes here have breached the surface. In addition to a multitude of small submarinevolcanoes, there are several larger ones: Esmeralda Bank, Zealandia Bank, Ruby and East Diamante Seamount. Several of these have some historic record of possible activity (mostly disturbed, discolored water) and Diamante has noticeable hydrothermal activity.

The islands proper start (moving S to N) with the intriguing Anatahan, which consist of overlapping calderas 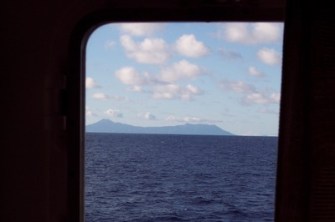 Morning view of Anatahan from my room, R/V Natsushima June 2009.

Anatahan had a significant eruption in 2003 and there is an interesting story about Japanese holdouts on the island at the end of WWII that was made into little-known movie. 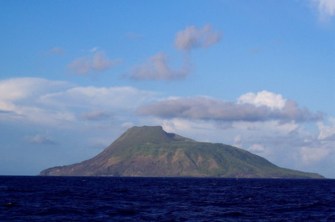 Sarigan Island in the Marianas.

Recently there was a submarine eruption south of Sarigan. A cruise underway at this moment may, if time permits, send an ROV to visit the presumed eruption site.

Guguan last erupted in the 19th century. Alamagan to the north has no definitive historic record of activity, although there was a false alarm in 1999. Pagan is one of the few islands (outside of the larger Saipan, Tinian, Rota and Guam) to have any population. Even minor activity there presents a concern due to this. Agrigan has a caldera that was the site of small eruption around 1917. The symmetrical cone of Ascuncion had reported activity early in the 20the century, but its northern neighbors, the Maug Islands, have no historic eruptions and are in fact the eroding remnants of a caldera. Further north we enter another seamount province, except for Uracas or Farallon de Pajaros. This particular volcano and its submarine neighbors seem to be particularly restless. North of FdP is considered to be the end of the Marianas and the start of the Bonin or Volcano Islands.

Guguan and Alamagan Islands in the Marianas. Image by Ed Kohut.

Another mystery volcano photo – and this one should be fun!