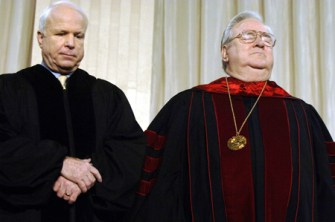 Last week, I noted McCain’s not-so-subtle attempt in a new Web advertisement to draw comparisons between Obama and the anti-Christ with the ad using imagery taken directly from the immensely popular Left Behind series of books.

Now Time magazine reports that the Web spot’s creator has close ties to Christian Coalition guru Ralph Reed. Moreover, for the past two years, allegations that Obama is the anti-Christ have been bubbling up at far right Christian sites, fears that reached a crescendo after Obama’s speech at Berlin two weeks ago. The ad appears clearly designed to play on and amplify these false perceptions.

Funny that McCain, who had previously criticized “agents of intolerance” such as Jerry Falwell, now uses strategies directly from their playbook.

Key excerpts from Time magazine below:

The ad was the creation of Fred Davis, one of McCain’s top media gurus as well as a close friend of former Christian Coalition head Ralph Reed and the nephew of conservative Oklahoma Senator James Inhofe. It first caught the attention of Democrats familiar with the Left Behind series, a fictionalized account of the end-time that debuted in the 1990s and has sold nearly 70 million books worldwide. “The language in there is so similar to the language in the Left Behind books,” says Tony Campolo, a leading progressive Evangelical speaker and author.

As the ad begins, the words “It should be known that in 2008 the world shall be blessed. They will call him The One” flash across the screen. The Antichrist of the Left Behind books is a charismatic young political leader named Nicolae Carpathia who founds the One World religion (slogan: “We Are God”) and promises to heal the world after a time of deep division. One of several Obama clips in the ad features the Senator saying, “A nation healed, a world repaired. We are the ones that we’ve been waiting for.”

The visual images in the ad, which Davis says has been viewed even more than McCain’s “Celeb” ad linking Obama to the likes of Paris Hilton and Britney Spears, also seem to evoke the cover art of several Left Behind books. But they’re not the cartoonish images of clouds parting and shining light upon Obama that might be expected in an ad spoofing him as a messiah. Instead, the screen displays a sinister orange light surrounded by darkness and later the faint image of a staircase leading up to heaven.

Perhaps the most puzzling scene in the ad is an altered segment from The 10 Commandments that appears near the end. A Moses-playing Charlton Heston parts the animated waters of the Red Sea, out of which rises the quasi-presidential seal the Obama campaign used for a brief time earlier this summer before being mocked into retiring it. The seal, which features an eagle with wings spread, is not recognizable like the campaign’s red-white-and-blue “O” logo. That confused Democratic consultant Eric Sapp until he went to his Bible and remembered that in the apocalyptic Book of Daniel, the Antichrist is described as rising from the sea as a creature with wings like an eagle.

Sapp knows that the phrasing and images could just be dismissed as a peculiar coincidence. After all, it was Oprah Winfrey who told an Iowa crowd that Obama was “the one!” But, he insists, “the frequency of these images and references don’t make any sense unless you’re trying to send the message that Obama could be the Antichrist.”…

…The speculation reached a fever pitch after Obama’s European trip and the Berlin speech in which he called for global unity. Conservative Christian author Hal Lindsey declared in an essay on WorldNetDaily, “Obama is correct in saying that the world is ready for someone like him — a messiah-like figure, charismatic and glib … The Bible calls that leader the Antichrist. And it seems apparent that the world is now ready to make his acquaintance.” The conservative website RedState.com now sells mugs and T shirts that sport a large “O” with horns and the words “The Anti-Christ” underneath.

Related
The Future
Custom Image Test
Lorem ipsum etc etc etc etc
Life
Visualization test
Lorem ipsum dolor sit amet, consectetur adipiscing elit. Nullam id tincidunt mi. Morbi malesuada nulla sit amet est hendrerit tincidunt. Etiam viverra, nisl id volutpat eleifend, est augue sodales orci, […]
L&D Strategy
Transfer of learning: The necessary step to make learning stick
Transfer of learning is a concept that should be top-of-mind when planning any learning and development program. Why? In a perfect world, the billions of dollars organizations collectively spend every […]
Starts With A Bang
Why we’ll never see back to the beginning of the Universe
We thought the Big Bang started it all. Then we realized that something else came before, and it erased everything that existed prior.
Thinking
Is there an afterlife? See how your answer compares to polled Americans
There is more consensus on what heaven looks like than hell.
Up Next
Guest Thinkers
Mark McKinnon on McCain’s Advertising Strategy
Mark McKinnon was the genius behind Bush’s 2004 media strategy. The Bush campaign successfully portrayed Bush as “a strong leader in a time of change” while redefining Kerry as “weak, […]