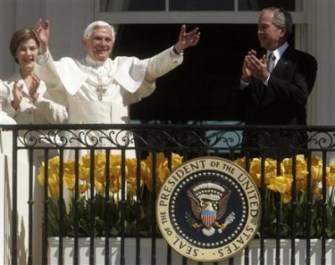 Pew has released an in depth analysis of news coverage of the Pope’s U.S. visit. As I have posted previously, some media critics have claimed that the press gave the Pontiff a pass on hard-hitting questions while polls show that the Pope’s visit was a major public relations success.

As the Pew news analysis finds, the Pope’s visit dominated headlines, accounting for 16% of the total news hole for the week, eclipsing for example the 5% of coverage devoted to the war in Iraq and second in attention only to the 31% of coverage devoted to the election. According to Pew, the saturation coverage of the Pope’s visit makes it one of the top four news stories of 2008.

Also of interest was the strategic framing by the Vatican of the sexual abuse scandals, a framing controlled by way of careful news management including the stipulation that journalists had to submit their questions in advance. Here’s what Pew finds about how the Pope’s preferred “shame” framing was echoed in the press:

Pope Benedict said he felt “deeply ashamed” of the scandal, offering a description of his personal emotion, which the media emphasized. ABC’s Chris Cuomo, reporting the next day on “Good Morning America,” described the scene this way: “Even before his plane … touched down, the pope addressed one of the most troubling issues in the American Catholic Church, the priest abuse scandal, telling reporters on his flight that the shame of the church is deeply felt.”

The New York Times’ April 16 headline said, “Pope, in U.S., Is ‘Ashamed’ of Pedophile Priests.” On CNN’s “AndersonCooper360,” the network’s veteran Vatican analyst, John Allen, said he was the reporter who submitted the question on the scandal several days before the trip began. Allen was told the pope would answer the question in Italian. “I stressed to the pope,” said Allen, “that, because this was such an important topic, it would be valuable to have it from him in English. And he was quite ready to do that. So, I think what that reflects is an understanding on the part of this pope that he cannot come into the United States and not engage what has been the deepest wound in the life of the Catholic Church in this country for more than its 200-year history, which, of course, is the sex abuse crisis.”

Here are the key findings of the Pew analysis:

1. The media devoted significant amounts of time and space to the story. All told, the pope’s visit accounted for 16% of the overall “newshole,” the time or space available in an outlet for news content, during the week of April 14-20. In the first four months of 2008, the only stories that received more coverage during a single week were the presidential campaign, the troubled U.S. economy and the Eliot Spitzer sex scandal.

2. Two story lines dominated the coverage. Out of all the newshole dedicated to the pope’s visit, more than half (54%) was comprised of stories that focused on the impact of the clergy sex abuse scandal (37%) or on the relationship between Pope Benedict and American Catholics (17%).

3. Coverage, for the most part, ignored the pope’s relationships with external constituencies. Just 1% focused on the pope’s relationships with other religious leaders or other faiths, and only 3% focused on the pope and the Bush administration or the pope and American politics. Only 2% of the coverage made any reference to the U.S. presidential campaign.

What the media did not cover during the pope’s U.S. visit may be as noteworthy as what it did cover:

* A controversial 2006 portrayal of the Prophet Muhammad by Pope Benedict prompted a global uproar among Muslims, and the pope’s March 2008 baptism of a Muslim convert to Catholicism raised more than a few eyebrows, yet the pope’s April 17 meeting in Washington, D.C., with Muslims, Buddhists, Hindus and Jews received little media attention. Overall, only 1% of the newshole dedicated to the pope’s visit focused on his relations with other religious leaders or faiths.

* On April 16, Pope Benedict became only the second pontiff ever to visit the White House. He met privately with President Bush to discuss, among other things, the plight of Christians in Iraq. He also gave an address on the South Lawn in which he said, “a democracy without values can lose its very soul.” The more political aspects of the pope’s visit were not a major factor in the coverage. Only 3% focused on the pope and the Bush administration or on Pope Benedict and American politics.

* In a presidential election year, the pope touched on a few policy issues that went beyond the church’s well-known opposition to abortion. For example, the pope addressed environmentalism, saying that “the earth itself groans under the weight of consumerist greed and irresponsible exploitation.” He also commented on immigration in a joint statement with Bush that pointed to “the need for a coordinated policy” that ensures “humane treatment and the well being” of immigrant families. But with a few notable exceptions, such as an April 20 New York Times article on the pope and his immigration stance, such issues were not a major focus of coverage. Less than 2% of the coverage made any reference to the U.S. presidential campaign.

Related
Life
Visualization test
Lorem ipsum dolor sit amet, consectetur adipiscing elit. Nullam id tincidunt mi. Morbi malesuada nulla sit amet est hendrerit tincidunt. Etiam viverra, nisl id volutpat eleifend, est augue sodales orci, […]
L&D Strategy
Transfer of learning: The necessary step to make learning stick
Transfer of learning is a concept that should be top-of-mind when planning any learning and development program. Why? In a perfect world, the billions of dollars organizations collectively spend every […]
Starts With A Bang
Why we’ll never see back to the beginning of the Universe
We thought the Big Bang started it all. Then we realized that something else came before, and it erased everything that existed prior.
Thinking
Is there an afterlife? See how your answer compares to polled Americans
There is more consensus on what heaven looks like than hell.
Thinking
How science changes the way we think, according to 10 leading scientists
A group of prominent scientists shares how research has changed them.
Up Next
Guest Thinkers
Francisco Ayala on the Confusing New Atheist Message
As I wrote yesterday, one of the emotional strategies employed in Expelled is to paint atheist pundits as the stand-ins for “big science,” in the process selectively avoiding interviews with […]