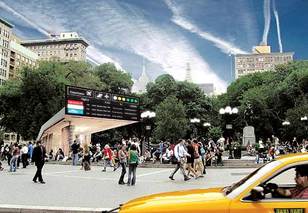 n If you’ve ever flown out of New York City, you know that it can be a nightmare actually getting out of Manhattan to the airport — it doesn’t matter if you fly out of LGA, JFK or even EWR. Plus, with all the anti-terrorism measures enacted since 9/11, getting through security and checking in at any of these airports can take much longer than ever expected. With that in mind, New York Magazine recently asked design firm SHoP Architects to suggest a radical design to overhaul New York’s three-airport system. One answer might just be the ability to check-in at locations around Manhattan like Union Square (pictured), and then take a dedicated high-speed rail link from there to the airport:

“No one doubts that the city needs a new airport: Our gateways to the skynare inconvenient, inefficient vestiges of decades past, theirnweaknesses made all the more apparent by the fact that the transportnhub at the other end of a flight to or from New York is almostnalways sleeker and less chaotic than our three-headed monster…

SHoP Architects responded to ournrequest for a superior fourth-airport proposal with a fascinatingnscheme for solving the space crunch using the ones we already have.nIt’s a high-speed-rail loop, in which trains would serve both as anmeans of conveyance to the airport and, in effect, as thenairport. In a bold new check-in paradigm, passengers would get theirnboarding passes and go through security at special stations in UnionnSquare and Red Hook (and Astoria and Grand Central and …), then hop onntrains that would let them out directly at their plane. Such annapproach would have the added benefit of reducing the airport spacendevoted to terminals, making room for more runways. Aviation expertsnwill no doubt find holes to poke here—but this is our future-jet-agenfantasy, and if Amsterdam can figure out how to put a commuter-railndepot underneath the airport food court, we can certainly get a fewntrains up and running…”

Anyway, be sure to check out the cool graphics included with the article: (1) The New & Improved JFK and (2) The Inter-Airport, High-Speed Shuttle System.

Google innovation in the Big Apple

If you’re looking for a quick Google fix this week, Information Week is dealing. Start off by learning more about Larry Page’s pet innovation projects. Apparently, the Google co-founder thinks […]