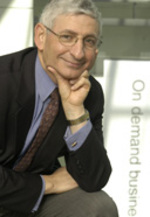 As the Vice President of Technical Strategy and Innovation at IBM, Irving Wladawsky-Berger has emerged as one of the most important voices in the online innovation world. Which is why I was a bit surprised to hear that he’s retiring after a 37-year career with IBM. (Let’s hope that his IBM innovation blog remains active!) Anyway, in a recent interview with The Guardian, Irving Wladawsky-Berger talked about the rapid rise and proliferation of the Internet, IBM’s embrace of the open-source movement, the company’s experimentation with the virtual world of Second Life, and the changing competitive landscape within the IT world. He also hints at the innovation model used by companies like IBM:

“I think that what I have enjoyed doing through the years is being very,

very involved with advanced technologies, but figuring out how to make

them successful in the marketplace. And that requires you to have

working with clients and others to understand their needs.”