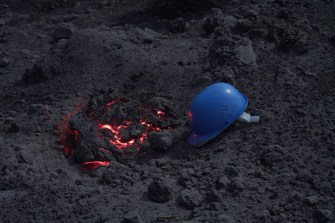 One of the most famous eruptions in human history (at least recent history) is the 1883 eruption of Krakatau in Indonesia, made (more) famous by Simon Winchester’s book (and the inappropriately named film Krakatoa: East of Java … hint: look at a map). Since the cataclysm eruption, a new volcano has risen where the old one once stood. Anak Krakatau (I believe loosely translates to “son of Krakatau”) is a fairly active volcano, producing Strombolian explosive eruptions – fairly mild – that threw volcanic bombs and debris onto the island and into the surrounding ocean (thus, building up the island itself). Photovolcanica has put up a fabulous website with lots and lots of pictures of current and recent activity at Anak Krakatau, including some great shots of volcanic bombs (see above). It is well worth your time to peruse the pictures and read the information of the current eruptions, the 1883 cataclysm and some information on previous eruptions at Krakatau.