Last year, the city of Christchurch in New Zealand experienced a M7.2 earthquake. Luckily that earthquake was centered in a relatively unpopulated area outside the city in the middle of the night. On Monday, however, a potential aftershock of the September 2010 earthquake struck closer to the city during midday, a potentially much more dangerous mix. The new earthquake was a M6.3 (preliminary) at ~5 km depth and initial reports of the earthquake suggest a lot of damage in the city (top left and below). There is already some impressive video that seems to have captured one of the aftershocks of this new earthquake as it happened as well. You can see the webicorder of the region here as well. GNS New Zealand does have an excellent image showing the shockwave of the earthquake as it was received across the country (see below) – the stations are listed north (top) to south (bottom), with the signal from the main earthquake and aftershocks. 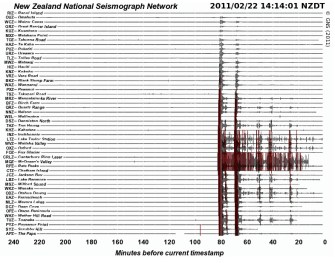 The shockwave of the 2/22 Christchurch Earthquake arriving across New Zealand. Click here to see a larger image.

More updates as I find them … and please post any you find as well. Until then, let’s hope that this earthquake isn’t as bad as it seems it could be.

UPDATES (note, you can see a running news feed from the NZ Herald)

Sadly, this new earthquake in Christchurch brings home some very important lessons when it comes to earthquakes: (1) magnitude doesn’t control the level of destruction; (2) location and depth of the focus are vital for understanding the level of destruction; (3) time of day can greatly effect the casualties in an earthquake. Had this earthquake struck during the night like last September’s earthquake, the death toll might have been smaller – individual homes tends to survive better than larger office or professional buildings. Truly a sad day for New Zealand. 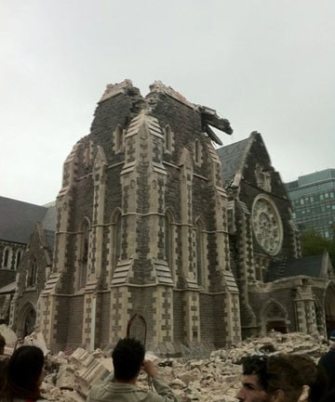 Damage to the Cathedral in Christchurch during the February 22, 2011 earthquake.

Sam Stein asks, “Would The Democrats Have Been Better Off Letting Walker’s Bill Pass?”Better off how? If Wisconsin’s Democratic legislators had sat still and let the bill pass, the majority […]