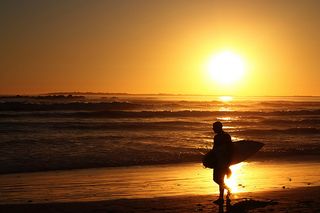 The recent skirmish between Apple and Google — filled with legal inuendos, regulatory scuffles and high-profile departures — has, if anything, crystallized for me what I had been thinking for the past six months: what we have been witnessing is nothing less than a battle for the future of the surfable Web. On one hand, we have Google, which favors the widest, broadest Web possible, so that its cash cow Google Search functionality remains the key to the discovery of all content on the unruly, unmanageable Web, filled with ripcurls and big waves. On the other hand, we have Apple, which favors a Web that can be managed simply and efficiently from apps downloaded for $1.99 or less from its wildly-popular Apps store. (All apps, in fact, except that pesky little Google Voice app!)

Which leads to the inevitable question: how often do you actually “surf” the Web anymore? Ever since I transitioned from the BlackBerry to the iPhone, I noticed that my “web-surfing” habits had been changing. Quite simply, I was using the Safari browser on the iPhone considerably less than expected, and the nifty little applications from the iPhone Apps store more than I ever thought possible. In fact, as a mobile Internet user, I rarely – if ever – “surf” the Web. I expect the apps to do all the heavy lifting for me. And, what’s more, these mobile browsing habits have been spilling over into my laptop & desktop browsing habits. If anything, I’ve been going to more “destination” websites than ever before and haven’t been “surfing” the Web nearly as much in search of interesting, random tidbits anymore. (As a quick test, check out the advertisements for Apple’s Apps store and ask yourself: do these apps encourage me to surf the Web, or do they encourage me to head for a specific destination site?)

The conclusion, of course, is that we may be witnessing the Strange Death of the Surfable Web. In an Apple-centric world, the Web can be navigated by a handful of apps. In a Google-centric world (which we’ve had for the past 10 or so years), the Web can be navigated only by the biggest, baddest search engine around — hence all the unsuccessful attempts by would-be Google-killers to slay the mighty Goliath.

Not that there’s anything wrong with an Application-centric view of the Web. It does make one’s life easier to manage — but what impact is it having on our next generation of Web surfers?