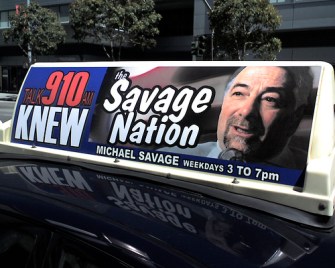 That’s the question posed this past week at PBS’ Bill Moyers Journal. The program is a hard hitting examination of the impact of radical right talk radio, books, and TV shows not just on the nature of political discourse but also their link to violent actions against elected officials and fellow citizens.

When Glenn Beck says: “I’m thinking about killing Michael Moore and I’m wondering if I could kill him myself, or if I would need to hire somebody to do it,” is it just harmless rhetoric or something more?

When Michael Reagan says that 9/11 deniers should be taken out and shot, is that harmless?
When Michael Savage refers to liberals as psychotic, as traitors, and as a virus on America, how does that shape audience perceptions and even actions against liberals?

What about when Rush Limbaugh tells his listeners to launch Operation Chaos against the Democrats with an explicit goal of generating violence at the Democratic Convention. As Limbaugh told his audience: “This is about chaos, this is why it is called Operation Chaos[…]the dream end, if people say what is your exit strategy. The dream end is this keeps up to the convention. And that we have a replay of Chicago 1968, with burning cars, protests, fires, literal riots and all of that. That’s the objective here.”

What do readers think? Could radical right media actually incite violence against liberals and or various out groups in society?

Related
Life
Visualization test
Lorem ipsum dolor sit amet, consectetur adipiscing elit. Nullam id tincidunt mi. Morbi malesuada nulla sit amet est hendrerit tincidunt. Etiam viverra, nisl id volutpat eleifend, est augue sodales orci, […]
L&D Strategy
Transfer of learning: The necessary step to make learning stick
Transfer of learning is a concept that should be top-of-mind when planning any learning and development program. Why? In a perfect world, the billions of dollars organizations collectively spend every […]
Starts With A Bang
Why we’ll never see back to the beginning of the Universe
We thought the Big Bang started it all. Then we realized that something else came before, and it erased everything that existed prior.
Thinking
Is there an afterlife? See how your answer compares to polled Americans
There is more consensus on what heaven looks like than hell.
Thinking
How science changes the way we think, according to 10 leading scientists
A group of prominent scientists shares how research has changed them.
Up Next
Guest Thinkers
Two Essays on Expelled, Dawkins, and PZ
Two essays I wrote on Expelled are now in print and I have placed PDFs of the articles online. The first shorter essay appears at Skeptical Inquirer magazine and reviews […]