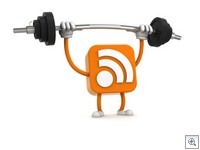 Are you an infrequent edublogger? Would you like to blog more but often have writer’s block?

If so, check out Melanie Holtsman’s Fall Blog Challenge. She has a list of weekly topics for you. Simply react to her prompts and tag each post (and tweet to @Holtsman) with the following hashtag:

What are you waiting for? Get your creative juices flowing and connect with other edubloggers. Great idea, Melanie!

In September 2007 I profiled a book that I had purchased called The 21st Century Principal. In that post, I noted the extreme paucity of content related to digital technologies, […]