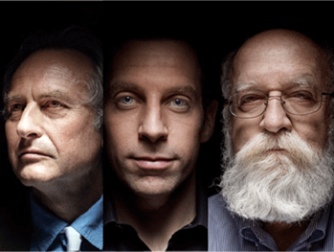 There’s a definite buzz about Sunday’s panel at the AAAS meetings in Boston. With a focus on the theme of “Communicating Science in a Religious America,” there is sure to be a large crowd and a healthy discussion. The panel will be held on Sunday afternoon from 1:45 to 4:45 p.m, Hynes Convention Center, Third Level, RM 309.

For a preview of one paper, see this press release detailing William and Mary anthropologist Barbara J. King’s presentation

In her AAAS presentation, King will address what she sees as a trend among scientists toward bumper-sticker declarations of faith (or lack thereof), most discernible in scientific books written for a lay audience.

“I see a pattern that I call the ‘confessional’ or the ‘testimonial.’ They’re writing about their personal beliefs about religion, so they are speaking as scientists, but they really want to confess,” King said. “The majority of them say ‘religion is an illusion’ or ‘science needs to replace religion.’ Some of them display an evangelical zeal to convince people that science needs to rid the United States of God. To me, this is a huge mistake. Everything is wrapped in a personal confessional and I think that is doing a disservice to communicating science in religious America.”

She is quick to add that the trend also includes declarations of faith by Christian scientists, which are just as divisive as the testimonials by agnostic or atheistic scientists. In her paper, embargoed by AAAS until after the annual meeting, King names names, citing specific examples of confessionals/testimonials by her fellow scientists–with one exception.

“I have written this paper without mentioning Richard Dawkins,” King said, referring to the author of The God Delusion. “Everyone knows that Richard Dawkins says that science has to oppose religion and we have to get people out of their sad delusions by making them think rationally. I don’t talk about him.”

She doesn’t talk about her own faith–or even if she has one–in the context of her work. “Then, the conversation becomes about me and I am not what the conversation should be about,” she explained. “I say that we all should frame science around the evidence. If you say ‘Here’s my science and it’s wrapped up in my Christianity’ or ‘Here’s my science, it’s wrapped up in my atheism,’ then people remember the atheist, they remember the Christian. We need to give more credit to the American public interested in science. They can read the science, evaluate the hypotheses and the evidence presented.”

Related
Life
Visualization test
Lorem ipsum dolor sit amet, consectetur adipiscing elit. Nullam id tincidunt mi. Morbi malesuada nulla sit amet est hendrerit tincidunt. Etiam viverra, nisl id volutpat eleifend, est augue sodales orci, […]
L&D Strategy
Transfer of learning: The necessary step to make learning stick
Transfer of learning is a concept that should be top-of-mind when planning any learning and development program. Why? In a perfect world, the billions of dollars organizations collectively spend every […]
Starts With A Bang
Why we’ll never see back to the beginning of the Universe
We thought the Big Bang started it all. Then we realized that something else came before, and it erased everything that existed prior.
Thinking
Is there an afterlife? See how your answer compares to polled Americans
There is more consensus on what heaven looks like than hell.
Thinking
How science changes the way we think, according to 10 leading scientists
A group of prominent scientists shares how research has changed them.
Up Next
Guest Thinkers
JOURNAL WATCH: “Image Bytes” in Election Coverage
Scholars have long warned about the increasing sound bite nature of our media and political system, but overlooked is the visual nature of this trend. A new study in the […]