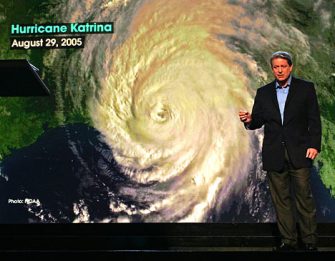 Conventional wisdom pegs 2007 as the long awaited tipping point in waking the American public up to the urgency of global warming. Yet as I review in my latest “Science and the Media” column at Skeptical Inquirer Online, such optimism runs up against the reality of public opinion.

Despite Gore’s breakthrough success with Inconvenient Truth, American opinion today is little different from when the film premiered in May 2006. Gore has done a very good job of intensifying the beliefs of audiences who were already concerned about climate change, but a deep perceptual divide between partisans remains.

Still, the past twelve months were not without several overlooked developments that present both opportunities and challenges. They include:

a) The emergence of a new paradigm in climate change communications.

b) The rise of an “invisible middle” of climate perspectives.

c) And a powerful new public health definition of the problem.

In the column, I highlight these developments with many links to past posts or comments at Framing Science or other sources such as Andrew Revkin’s new climate blog hosted by The NY Times.

Related
Life
Visualization test
Lorem ipsum dolor sit amet, consectetur adipiscing elit. Nullam id tincidunt mi. Morbi malesuada nulla sit amet est hendrerit tincidunt. Etiam viverra, nisl id volutpat eleifend, est augue sodales orci, […]
L&D Strategy
Transfer of learning: The necessary step to make learning stick
Transfer of learning is a concept that should be top-of-mind when planning any learning and development program. Why? In a perfect world, the billions of dollars organizations collectively spend every […]
Starts With A Bang
Why we’ll never see back to the beginning of the Universe
We thought the Big Bang started it all. Then we realized that something else came before, and it erased everything that existed prior.
Thinking
Is there an afterlife? See how your answer compares to polled Americans
There is more consensus on what heaven looks like than hell.
Thinking
How science changes the way we think, according to 10 leading scientists
A group of prominent scientists shares how research has changed them.
Up Next
Guest Thinkers
Science Societies: New Evolution Frames Needed
An editorial by 17 professional societies at the FASEB Journal details the findings of a new survey on public opinion about evolution. The editorial closes by urging new approaches to […]