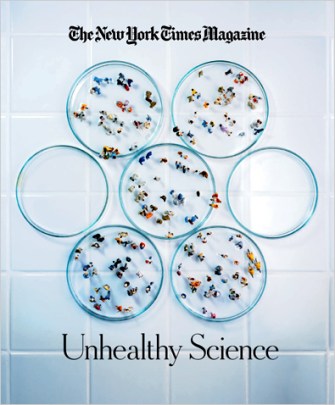 In a cover story at this week’s NY Times magazine, Gary Taubes digs deep into the world of epidemiological research on diet and health. It’s an important topic to call attention to, but the article is framed in disastrous and irresponsible ways.

Instead of telling a detective story hung around just how amazingly complex it is to figure out the linkages between diet, drug therapies, and human health, Taubes and his editors go the unfortunate route of defining the article in terms of conflict, drama, and public accountability.

They readily translate their preferred interpretation by way of titles, headers, and call outs such as “bad science,” “science vs. public health,” “the flip flop rhythm of science,” and “why we can’t trust” science. Perhaps more powerfully, the art work featuring human miniatures in petri dishes and test tubes instantly relays a message of human experimentation and “big science.”

To be clear, Taubes article offers valuable insight into the uncertainty and social side of science, but the misleading moral lesson is that science can’t be trusted.

It’s not to be unexpected from the NY Times magazine, a space at the newspaper where policy issues are often over-dramatized to stir attention and drive discussion (see this Public Editor column). There is nothing wrong with a magazine striving to set the public or policy agenda, but to do so in ways that unfairly trigger reader (and policymaker) distrust is irresponsible.

In fact, in holding the institution of science accountable, Taubes and his editors fail to turn a critical eye on their own profession. One reason health studies might appear so confusing is because of what fellow NY Times reporter Andrew Revkin describes as the “tyranny of the news peg.”

As Revkin details in his excellent chapter at the Field Guide for Science Writers, one problem in the communication of uncertain science is that university research officers and journalists overwhelmingly define what’s news in science as the release of a new scientific study. Everyone benefits from this negotiation of newsworthiness, as universities compete for prestige and future funding dollars while journalists file dramatic narratives on deadline and with easier effort than required in a more thematic backgrounder.

Yet often lost is context for what previous research might say or where the body of evidence might be leading. Everyone’s a cognitive miser including the lay public, policymakers, and editors at magazines like the NY Times’ weekly. Constant exposure to “true today, not true tomorrow” reporting on new health studies leads to the easy interpretation that something is wrong with the institution of science, rather than addressing a systematic bias in how research is communicated and then reported by journalists.

Curtis Brainard at Columbia Journalism Reviewweighs in on Taubes’ article and my critique.

Charlie Petit at the blog for MIT’s Science journalism program sides with my criticism.

“End of Science” author John Horgan has a different take.

Related
Life
Visualization test
Lorem ipsum dolor sit amet, consectetur adipiscing elit. Nullam id tincidunt mi. Morbi malesuada nulla sit amet est hendrerit tincidunt. Etiam viverra, nisl id volutpat eleifend, est augue sodales orci, […]
L&D Strategy
Transfer of learning: The necessary step to make learning stick
Transfer of learning is a concept that should be top-of-mind when planning any learning and development program. Why? In a perfect world, the billions of dollars organizations collectively spend every […]
Starts With A Bang
Why we’ll never see back to the beginning of the Universe
We thought the Big Bang started it all. Then we realized that something else came before, and it erased everything that existed prior.
Thinking
Is there an afterlife? See how your answer compares to polled Americans
There is more consensus on what heaven looks like than hell.
Thinking
How science changes the way we think, according to 10 leading scientists
A group of prominent scientists shares how research has changed them.
Up Next
Guest Thinkers
AAAS Panel: Communicating Science in a Religious America
For scienceblogs.com readers who have never been to an annual meeting of the American Association for the Advancement of Science, you are missing out on the world’s greatest discussion of […]