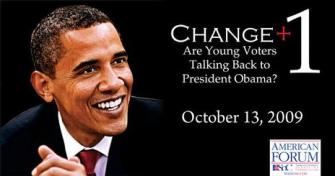 Tonight, the AU School of Communication’s American Forum series focuses on “Change + 1: Are young voters talking back to Obama?” A diverse panel of experts will look not only at how the Millennial generation views Obama personally but also how this age-group views the important issues facing the country today, including the economy and health-care as these issues affect them, transparency in government and the effectiveness of social-networking to govern versus social-networking to get elected.

The Forum is held here on campus at the beautiful Katzen Arts Center and will be re-broadcast on the NPR flagship affiliate WAMU, Wednesday night, Oct. 14th at 9 p.m. – on air at 88.5 FM for those in the DC metro area, or online at http://wamu.org/listen/ or you can listen on your mobile phone at 202-885-7878.

In a provocative article published last year, Nature columnist David Goldston tackled the topic of science and religion, focusing on the implications for public engagement and emerging policy debates. In […]