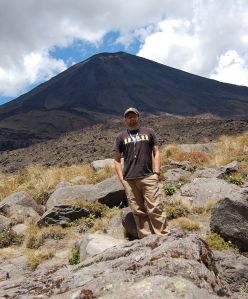 I made it back from New Zealand yesterday after spending the last two weeks looking at some of the most remarkable volcanic landscapes you could imagine. I’ll add more detail soon for those of you interested in the volcanism of the North Island, but I’ll leave you with a picture of yours truly in from of Ngauruhoe (a.k.a Mt. Doom) along the Tongariro Crossing. The volcano last erupted in 1977 and it considering the youngest vent of Tongariro. Ngauruhoe has had >60 eruptions over the last 150 years.