I’m officially out of the mountains in the Mineral King area – the field work went great, we collected some fabulous Triassic-Jurassic rhyolites from a pendant in the Sierra Nevada Batholith (and also enjoyed blueberry-sized hail and an unfortunate hike through a thorny thicket). I’ll have more to say later, but now I’ll be diving headlong into working on papers during my few days here in Davis … but I’ll try to catch up on all your comments left while I was away! 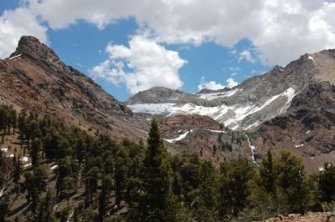 The Mineral King region of the Sierra Nevada in California. Click on the image to see a larger version. Image by Erik Klemetti, July 2010.

Friday Flotsam: All quiet in North Korea, what to watch for at Katla and the Kilauea lava lake

Wrapping up a crazy week with some news from North Korea, calming the Katla nerves, volcano insurance and the steady lava lake at Kilauea.