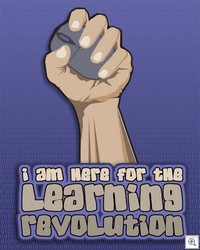 I’m getting excited for NECC 2009. Just a few more weeks and I’ll be griping about the hot, muggy weather in my hometown of Washington, D.C. I can’t wait!

Those of you who attended Edubloggercon last year may remember that I brought a bunch of buttons for attendees. This year, after consulting with Steve Hargadon and Anita McAnear at ISTE, I decided to spend some CASTLE funds to purchase name badge ribbons. You can see mockups below. The white one will be left-justified, not centered, and I’ll bring Sharpies so that folks can write in their Twitter name. The green and white ribbons will be available at Edubloggercon. Whatever’s left over will be put with the blue ribbons in the NECC Unplugged lounge. First come, first serve. Hope to see you there!