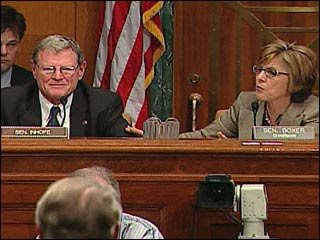 In describing her reaction to Inhofe’s theatrics during Al Gore’s testimony earlier this year, here’s what she had to say (full transcript of the interview):

BARBARA BOXER: I was a little stunned because here I had taken the gavel after a tough, you know, election season. We came in. We got power finally, albeit very small margin. But I was the chairman of the committee now. And Jim Inhofe, we work pretty well together, given our ideological differences. But he kept trying to run the hearings. And I kept saying to myself at some point I’m going to have to show him that I am the chairman of the committee.

BARBARA BOXER:Would you agree to let the Vice President answer your questions? And then, if you want an extra few minutes at the end, I’m happy to give it to you. But we’re not going to get anywhere —

BARBARA BOXER: No, that isn’t the rule of — you’re not making the rules. You used to when you did this. You don’t do this anymore. Elections have consequences.

BARBARA BOXER: What I meant is that times have changed now. And the Democrats are in charge. And this committee, what it means is that the environment is back, front and center.

On staunch GOP leader John Warner, she notes that when climate change was re-framed for the Virginia Senator as a national security matter, it connected the issue to something that Warner was already an advocate on and something that he cared about as a legislative leader.

It’s a leading example of what can happen when climate change is switched from the mental box of just an environmental issue and recast for Republicans as either a national security issue or as an opportunity to grow the economy around innovation and new technology. With this type of re-framing, support can be activated among an otherwise demobilized audience. Indeed, it’s no accident that the bill that was introduced was named “The Climate Security Act.”

Here’s how Boxer recounts Warner’s conversion to the issue.

BARBARA BOXER: Actually, I think we did better than I thought and there’s a reason, a man named John Warner. And for anyone who says, you know, individuals don’t matter, the government goes on, individuals matter.

BARBARA BOXER: Now, John Warner is a Republican. And by any measure, a conservative Republican, a man who’s retiring now and who has made his mark on national security.


(Cut to Warner speaking on the Senate floor.)

SEN. JOHN WARNER: Let’s show the American public this institution can work and address a complicated subject and try and reach a common ground and common understanding. To do nothing is not an option.

BARBARA BOXER: When he came to realize that global warming was a national security issue and when his kids and grandkids said to him, “You need to have a legacy on this issue,” and he then came to me, I knew we had brought bipartisanship to the committee.