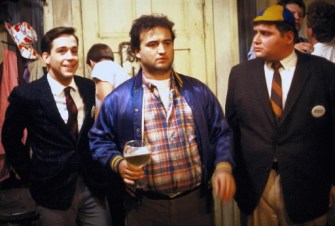 Bluto Blutarsky might just have something to teach Corporate America. Just as fat, drunk and stupid is no way to make it through life, big, wealthy and bloated is no way for corporations to go through the innovation process. Big, bloated companies with excess budgetary funds tend to throw money at problems rather than devise ingenious solutions to their problems. They do lazy, inefficient things to acquire customers. They over-rely on sales & marketing to “sell” inferior products. And perhaps worst of all, since they are so big and bloated, they feel almost compelled to do something BIG. As a result, they have a blind spot to new, emerging technologies.

Small, scrappy start-ups, on the other hand, are forced to bootstrap themselves with almost no money at all. They find a way to market their products & services in ingeniously efficient ways. Contrary to the popular consensus, resource constraints are actually a great way to accelerate the creative process. (There’s actually a whole sub-genre of management thinking out there dedicated to resource constraints on the innovation process).

Perhaps one anecdote (perhaps apocryphal) makes all this clear: during the 1960’s, the U.S. space program was desperate to play catch up with the Russians, who had just launched the Sputnik satellite. As a result, the U.S. government was willing to throw dollars at the problem. Millions of (inflation-adjusted) dollars later, the U.S. space program had developed an ergonomically-sound “Astronaut Pen” capable of writing in zero-G conditions. Thrilled, the head of the U.S. space program was eager to show off the new Astronaut Pen to his colleagues. He quickly called a security official within the government: “Tell me, do the Russians have anything close to this?” After a moment’s silence, the reply came back: “We already checked… we found out they’re using pencils…”

Which is to say, it’s possible to produce innovative work with a big budget — but the path to a simpler, more elegant solution usually doesn’t require a lot of money. Necessity, as they say, is the mother of invention.