Over the past few years, designers have made significant strides on the prosthetics front, blending modernist aesthetics with state-of-the art functionality. At the same time, biomimicry – design and engineering innovation inspired by nature’s systems and organisms – has been a rapidly growing area of R&D interest. Now, from designer Kaylene Kau comes a highly functional, sleek prosthetic arm inspired by the tentacle of an octopus. 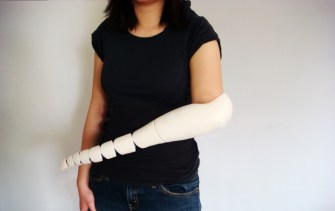 In her research, Kau found that a prosthetic arm tends to function as an assistant to the dominant arm, rather than a replacement that mirrors its function. In order to make the prosthetic arm versatile enough to accommodate different functions, Kau made it flexible and adjustable, allowing the user to control the degree of curl based on the task at hand.

While still only a concept, Kau’s design bespeaks an intriguing direction for biomimetic research in designing for disability.

Maria Popova is the editor of Brain Pickings, a curated inventory of miscellaneous interestingness. She writes for Wired UK, GOOD Magazine, Design Observer and Huffington Post, and spends a shameful amount of time on Twitter.