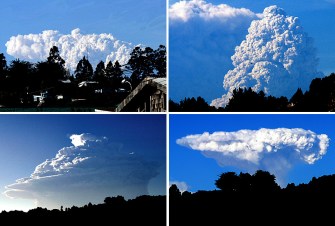 The newest reports out of Chile are indicating that the eruption at Chaiten has reached levels of intensity not seen since the eruption first started over six weeks ago. I have to admit, that isn’t a good sign in terms of keeping the volcanic edifice in one piece. There have been frequent, small (

The most troubling to me is this part of the report: [The military flyover] spotted two new craters. Officials said they saw bursts of gas coming from different areas around the base of the volcano. This suggests that there is enough pressure under the volcano to start opening new vents. Whether or not this leads to the formation of a ring fracture – the series of fractures around edge of a caldera that facilitate collapse – is pure speculation, but at the very least, this is a new stage of activity at Chaiten.