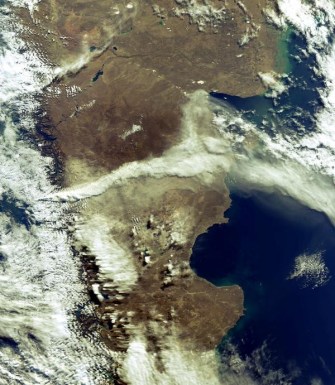 I’ve been trying to keep up with the Chaiten eruption in Chile, but the news is just beginning to sound like a broken record: eruption continues, ash falls, don’t know much else. However, it does sound like Chile is being realistic about people’s chances of moving back to the town of Chaiten – 10 km from the vent(s) – in the near future … and those chances are zero to none. This doesn’t entirely surprise me. If the town isn’t already buried, when the pyroclastic flows do start, whether they be from the collapse of the the eruptive column or from the vents themselves, the town will be wiped out. Chilean President Michelle Bechelet is quoted as saying “”We have never had a situation quite like this in Chile” and she’s quite right. In fact, I don’t think there is any country in the last 100 years within quite this sort of situation short of the Philippines and Mt. Pinatubo, but that is beginning to look like small fry in comparison.

nnHowever, I do have to take umbrage with this paragraph from the Patagonia Times report:n

The Chilean daily La Tercera reported on Sunday that a SERNAGEOMIN study had put the odds of such a collapse as at least 50 percent. The document said that there was increased build-up in the dome of magma currently covering the volcano’s crater. Futhermore, the material accumulating in the area was “highly dense,” and thus more prone to collapse. SERNAGEOMIN said that any implosion would cause complete destruction of everything within a 15 kilometer radius around the peak, an area which encompasses Chaitén, Santa Barbara, and several rural farming villages.

nOK, well, that is a surprise that the SERNAGEOMIN thinks that we have 50-50 odds of a collapse of the edifice now. Alright, that is not that much of a surprise, but to say it at this point likely means it is becoming more likely than not. However, I can assure you it has nothing to do with lava erupting from vents in the caldera being “very dense”. One, volcanoes don’t collapse from piling stuff onto them, the collapse from emptying what is underneath. Two, the magma being erupted is likely rhyodacite or rhyolite, which is the least dense of all lavas. Three, I’m guessing this is reason given is probably caused by something being lost in translation. If Chaiten does collapse, it will be because the eruption has emptied so much material from the magma chamber below the volcano that the edifice itself no longer has a foundation and it will collapse into that space (see also, Crater Lake, 7700 years ago).

Related
Life
Visualization test
Lorem ipsum dolor sit amet, consectetur adipiscing elit. Nullam id tincidunt mi. Morbi malesuada nulla sit amet est hendrerit tincidunt. Etiam viverra, nisl id volutpat eleifend, est augue sodales orci, […]
L&D Strategy
Transfer of learning: The necessary step to make learning stick
Transfer of learning is a concept that should be top-of-mind when planning any learning and development program. Why? In a perfect world, the billions of dollars organizations collectively spend every […]
Starts With A Bang
Why we’ll never see back to the beginning of the Universe
We thought the Big Bang started it all. Then we realized that something else came before, and it erased everything that existed prior.
Thinking
Is there an afterlife? See how your answer compares to polled Americans
There is more consensus on what heaven looks like than hell.
Thinking
How science changes the way we think, according to 10 leading scientists
A group of prominent scientists shares how research has changed them.
Up Next
Guest Thinkers
Chaiten Eruption, Day 7
nnAnother day, another development at Chaiten. Military stationed near the volcano helping with evacuations reported “booming noises” and saw incandescent blocks getting hurled from the vent area. This suggests that lava is […]