The northern Chilean and southern Peruvian Andes are full of volcanoes that look stunning – I mean, jaw-dropping details of volcanism litter the landscape. The reason for this is two fold: (1) there is an awful lot of volcanism in the northern Chilean/southern Peruvian Andes (as known as the Central Volcanic Zone) – and has been that way for over 10 million years and (2) it has also been very, very dry in the area (most of which is known as the Altiplano-Puna Plateau) for at least a few millions years as well – it is the home of the Atacama Desert! So, this means you get lots of volcanic eruptions that don’t have to face the rigors of weathering – so the stunning volcanic landforms are preserved. Let us look at an example of this: 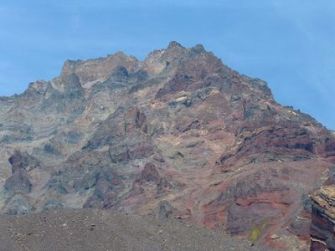 Click on the image to see a larger version.

Dissected with lava flow and pyroclastic deposit layering along with magmatic dikes exposed. The original flow features are rarely preserved and the volcano’s shape is dictated by glacial erosion. In other words: Beat the heck up. 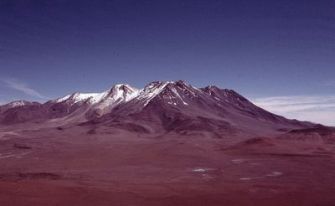 Click on the image to see a larger version.

I like to trot Aucanquilcha out for many reasons, but here, notice how you can still seem many of the flow features, especially in the middle – with levees and pressure ridges on the dacite flows. Most of the dacite lava flows are preserved with little erosion to expose the innards of the volcano

Now, lets guess how old these edifices are. Any ideas?

Well, according to work by Mariek Schmidt, the oldest observed lava flows on North Sister are ~400,000 years old, with some volcanic activity as recently as 55,000 years ago – in other words, pretty young, geologically speaking.

Aucanquilcha, on the other hand, has been dated by, well, me, and the youngest flows are potentially ~200,000 years old.There are some features that suggest a few younger than that, but something like 90% of the volcano was constructed between 1.05 million and 600,000 years ago, including those lava flows in the center of the image. So, most of Aucanquilcha was built before North Sister was even started – and North Sister looks much older!

This is (mostly) all thanks to the very different climates of the Cascades versus the northern Chilean and southern Pervuian Andes. Whereas North Sister has had to survive glaciations, wet climates, vegetation, snow and more, Aucanquilcha has mostly lived in a very dry climate, with some minor snow, very minor evidence of glaciation and little precipitation in the form of rain over its history. So, these gorgeous features are preserved at Aucanquilcha, while at North Sister, we get to examine the insides of the volcano – both equally fascinating things to study.

So, why bring this up now? Well, the NASA Earth Observatory posted an image of Sabancaya in the southern Peruvian Andes – and boy, is it dazzling. The lava flows on the volcano look like they might have erupted yesterday, however, a majority of the activity at Sabancaya didn’t happen yesterday (shockingly) – the youngest lava flow dated from Sabancaya is ~5,400 years old. However, the volcano did experience almost constant explosive eruptions between 1990 and 1998 – with small explosions as recently as 2003 – all vulcanian and phreatomagmatic (if you can believe that in the high Andes). The name of the volcano does mean “tongue of fire” in Quechua, which implies that the natives around the volcano had experienced eruptions as well. The lava flows that make up most of the edifice do appear to by Holocene or older, but again, the climate of this area of the Andes has preserved them stunningly, with very obvious levees on the sides of the flow – especially noticeable on the lava on the top center (labeled “lava flow”) and pressure ridges on top of the flow – see the flows directly to the right of the summit. These sorts of images make me pine for the Andes and the ability to see volcanoes preserved like this, although the rarified air of the Altiplano might make up for the lack of thickets.

Kilauea continues its active summer, the USGS refines the geologic timescale and the new boon in volcano tourism.