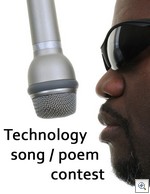 Okay, I’ve got one more contest in me this summer… As usual, the winner gets everlasting fame and a CASTLE mug. I’ll also throw in three great books: It’s Being Done: Academic Success in Unexpected Schools, Ordinary Resurrections: Children in the Years of Hope, and The Emergency Teacher: The Inspirational Story of a New Teacher in an Inner City School.

Create a technology-related (or, even better, an educational technology-related) poem or song. It can be a short piece (limerick, sonnet, a single verse or chorus) or something longer (anyone up for a ballad?). It doesn’t have to rhyme…

[sing to Some Girls Are Bigger Than Others, The Smiths]

I know you can do better than these!

Can’t wait to see what you come up with!

Sometimes a story is just so egregiously stupid that you not only have to post about it but encourage others to spread the word too. This might be one of […]