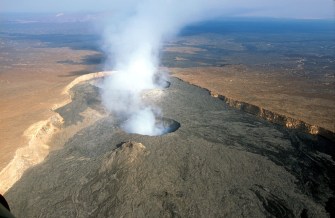 In one of the most oddly worded articles I’ve seen from the BBC, a lava flow from Erta Alean unidentified volcano in the Erte Ale range in Ethiopia has erupted a significant amount of lava. The headline states “Ethiopia volcano sets lava record”, which is strange on multiple counts, but mostly because I’m not familiar with any “lava records”, who might keep track of them and what, exactly, this “lava record” is. In fact, they don’t even mention it in the article itself. They do, however, point out that lava from this eruption has covered 300 square kilometers, which is a decent chunk of real estate, but no mention is made of how long it took to do this (or what type of lava, for that matter, but it is likely basalt). So, take this article as you will. The take home message is that Erte Alea volcano in the Erta Ale range, near Alu, has had a significant eruption with some associated earthquakes to go along with it.

Erta Ale is located on the East African Rift in Ethiopia – part of the Erte Ale Range – and is a fairly active shield volcano that erupts basaltic lava flows from both the central vent and from fissues, along with sometimes have a lava lake in the main caldera. These eruptions aren’t too much of a danger to the people who live near the volcano as it mostly issues lava flows rather than erupting explosively. It hasn’t erupted since 1967 according to the GVP, however, the volcano did erupt in 2005 (see above), displacing thousands of people.

nnJust got this email about the eruption in northern Afar, Ethiopia. Sounds like it has released a significant amount of sulfur into the atmosphere:n

Satellite instruments detected an eruption in northern Afar, Ethiopianon November 3. The eruption first manifested itself as a large sulfurndioxide (SO2) cloud drifting eastwards over the Arabian peninsula,ndetected by the Ozone Monitoring Instrument (OMI) and the AtmosphericnInfrared Sounder (AIRS). MODIS data from the University of Hawaii’snMODVOLC hot-spot monitoring tool (http://modis.higp.hawaii.edu)nconfirmed an extensive hot-spot (presumably lava flows) near Alunvolcano, in the northern part of the Erta ‘Ale range. Details arenstill sketchy and these observations are as yet unconfirmed from thenground.nn

A total of 0.1-0.2 Tg of SO2 was measured in the eruption cloud by OMI
nat ~1100 UT on November 4, by which time the SO2 cloud had reached
nsouthern Iran. Using the OMI SO2 data and radiosonde soundings,
nobserved SO2 cloud drift yields a preliminary estimate of the eruption
nonset time of 1400-1600 UT on November 3.

nMore details as they are available.

Related
Life
Visualization test
Lorem ipsum dolor sit amet, consectetur adipiscing elit. Nullam id tincidunt mi. Morbi malesuada nulla sit amet est hendrerit tincidunt. Etiam viverra, nisl id volutpat eleifend, est augue sodales orci, […]
L&D Strategy
Transfer of learning: The necessary step to make learning stick
Transfer of learning is a concept that should be top-of-mind when planning any learning and development program. Why? In a perfect world, the billions of dollars organizations collectively spend every […]
Starts With A Bang
Why we’ll never see back to the beginning of the Universe
We thought the Big Bang started it all. Then we realized that something else came before, and it erased everything that existed prior.
Thinking
Is there an afterlife? See how your answer compares to polled Americans
There is more consensus on what heaven looks like than hell.
Thinking
How science changes the way we think, according to 10 leading scientists
A group of prominent scientists shares how research has changed them.
Up Next
Guest Thinkers
A magma chamber’s ebb and flow
nnIf you ever want your research to be picked up by the popular press, you pretty much need to publish in the journal Science. It (along with Nature) are seen […]