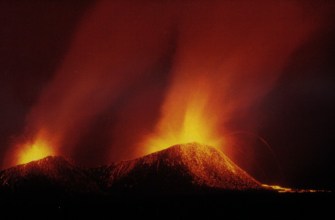 The latest reports from Cerro Azul in the Galapagos indicate that the current eruption that started last week is over. The volcano erupted from Thursday to Sunday and produced lava flows that travelled 10 km from the vent, but little damage was reported. It is hard to tell from the report if this is the believed to represent all the activity to be expected at Cerro Azul, but more likely than not we’ll see more eruptions if this is a new stage of activity at the volcano (in spanish).