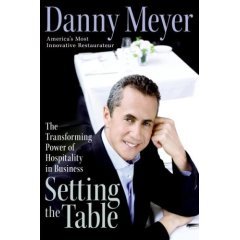 In his bestselling book Setting the Table: The Transforming Power of Hospitality in Business, celebrity restaurateur Danny Meyer explains how he went from a struggling 27-year-old first-time restaurant owner to the leader of a true hospitality franchise: the Union Square Hospitality Group. Anyone who’s ever visited New York has at least heard of Meyer’s collection of restaurants – whether it’s the flagship Union Square Cafe, the Gramercy Tavern, or the summertime cult favorite Shake Shack.

While Meyer’s autobiographical book is a fascinating read for anyone who delights in celebrity chefs, famous restaurants and the  behind-the-scenes tales of the hospitality industry, one of the most interesting chapters (“Context, Context, Context”) – from an innovation perspective – was all about choosing the right types of business initiatives to move forward with. As a celebrity restaurant owner, Meyer has been deluged with promotional and collaboration offers – some good, some bad. Through it all, though, he has relied on a set of 9 rules to keep him on the right path and avoid reckless over-expansion:

“I tend to view business opportunities  as chances to explore and learn, rather than as a license to expand the company without limits, at any cost. I’m not hell-bent on opening the greatest number of restaurants we are capable of operating. That would feel reckless and would make it nearly impossible for a company whose success is based on meaningful human interaction to retain its soul. I am not too interested in making deals just because we can make them. Since there will never be more than 24 hours in a day, the careful choices I make about how to spend that time determine the style with which my colleagues and I will spend it.

I have always believed that you can tell as much about a company by the deals it does not make as by those it does. Much of the success we have had has resulted from saying, “no, thank you,” to opportunities that, while initially compelling, would not have been wise to pursue…”

Much of the same thinking goes into the pursuit of new innovation initiatives at any company, whether it’s a high-tech giant like Google, a big industrial conglomerate like GE or a hospitality business group. The innovation projects that you reject ultimately have a greater impact on the company than the innovation projects you accept. By rejecting the wrong projects, you ensure that you have the resources and bandwidth to pursue the right projects.